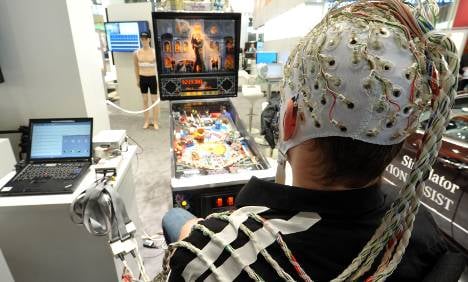 Huge crowds at the world’s biggest technology trade fair gathered round a man sitting at a pinball table, wearing a cap covered in electrodes attached to his head, who controlled the flippers with great proficiency without using hands.

“He thinks: left-hand or right-hand and the electrodes monitor the brain waves associated with that thought, send the information to a computer, which then moves the flippers,” said Michael Tangermann, from the Berlin Brain Computer Interface.

But the technology is much more than a fun gadget, it could one day save your life. Scientists are researching ways to monitor motorists’ brain waves to improve reaction times in a crash.

In an emergency stop situation, the brain activity kicks in on average around 200 milliseconds before even an alert driver can hit the brake. There is no question of braking automatically for a driver – “we would never take away that kind of control,” said Tangermann.

“However, there are various things the car can do in that crucial time, tighten the seat belt, for example,” he added.

Using this brain-wave monitoring technology, a car can also tell whether the driver is drowsy or not, potentially warning him or her to take a break.

At the g.tec stall, visitors watched a man with a similar “electrode cap” sat in front of a screen with a large keyboard, with the letters flashing in an ordered sequence.

The user concentrates hard when the chosen letter flashes and the brain waves stimulated at this exact moment are registered by the computer and the letter appears on the screen.

The technology takes a long time at present – it took the man around four minutes to write a five-lettered word – but researchers hope to speed it up in the near future.

Another device allows users to control robots by brain power. The small box has lights flashing at different frequencies at the four points of the compass.

The user concentrates on the corresponding light, depending on whether he wants the robot to move up, down, left or right and the brainwaves generated by viewing that frequency are monitored and the robot is controlled.

The technology is being perfected for physically disabled people, who can communicate and operate other devices using their brain.

“In future, people will be able to control wheelchairs, open doors and turn on their televisions with their minds,” said Clemens Holzner from g.tec.

The CeBIT runs until Saturday.