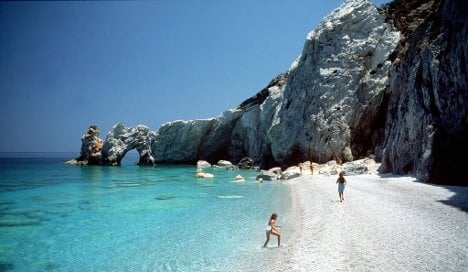 A beach on the GREEK island of Skiathos. Photo: DPA

“The Greek state must sell stakes in companies and also assets such as, for example, unpopulated islands,” Frank Schäffler, a member of parliament for the pro-business Free Democrats, told the Bild daily.

Marco Wanderwitz, an MP for Merkel’s own conservative Christian Democrats, said Athens should provide collateral for any money it receives from the European Union to help it out of its debt crisis.

“We give you cash, you give us Corfu,” the Bild commented.

Greece has around 6,000 islands off its coast, of which only 227 are inhabited, according to the country’s National Tourism Office website.

The cash-strapped country Wednesday launched a fresh round of draconian austerity measures in a bid to rein in a ballooning budget deficit that is more than four times above EU limits.

The Socialist government increased sales, tobacco and alcohol taxes and cut public sector holiday allowances to save €4.8 billion ($6.5 billion), equal to about two percent of gross domestic product (GDP). Pensions in the public and private sector were also frozen.

Merkel is set to hold talks with Greek Prime Minister George Papandreou on Friday to discuss the situation in Greece.