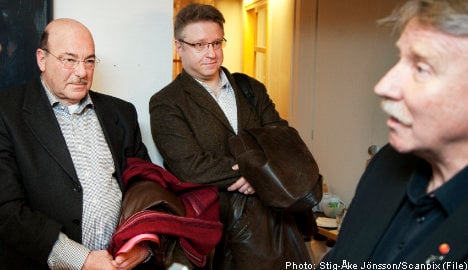 “I encounter a great many people from what one could call the Israeli lobby, who are not interested in what I say and what I think, but who do want to attribute lots of opinions to me,” Reepalu said in an interview with Danish TV2.

Reepalu and the Jewish Community (Judiska församlingen) have been at cross purposes of late after the mayor drew parallels in newspaper interviews between anti-Semitism and Zionism.

He has also denied that there had been any attacks on Jews in the city despite police figures showing that violent incidents against Jews have doubled over the last year.

Reepalu responded to a call from Social Democrat party leader Mona Sahlin last week to engage in a dialogue with Malmö Jews, meeting with representatives last week. His latest comments on the Danish TV2 show Lorry have been met with consternation by the Jewish Community.

In a letter to Reepalu and Mona Sahlin, the Jewish Community representatives have expressed their disappointment with the mayor’s televised comments.

“This is the kind of wording used by anti-Jewish or anti-Semitic forces, who claim that it is the Jews who control the media,” wrote Fred Kahn and Fredrik Sieradzki.

A recent series of articles in local newspaper Skånska Dagbladet detailed how Jews were choosing to leave the city as their situation become increasingly vulnerable in the face of attacks from extreme elements in the Muslim community and far-left political circles.

Reepalu reiterated to Danish TV his view that his quotes had been misrepresented, despite the fact that Skånska Dagbladet has released all its tapes and written correspondence with the mayor in a bid to show that he had not been misquoted.

Kahn and Sieradzki also referred Reepalu to their meeting with the mayor last week as part of the effort to patch up their differences.

“This was exactly the kind of comment we advised you to avoid if you didn’t wish to be misunderstood by people who take this as their cue to direct threats and harassment at Swedes of Jewish extraction.”

Reepalu said last week he was ready to act, via the newly formed Dialogue Forum, to ease tension between the city’s plethora of ethnic groups.