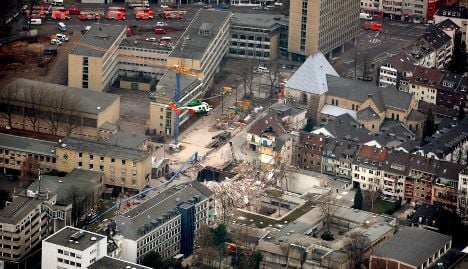 In a memorial address, Mayor Jürgen Roters renewed his sharp criticism of firms responsible for building a new U-Bahn metro tunnel, part of which caved in underneath the archive building.

”Who among us would have been able to imagine that internationally active building firms deceive, manipulate and defraud on such a great scale?” he said.

Since then, numerous media reports have implicated organised crime in the collapse, claiming shoddy work practices and falsified work protocols were rife on the construction sites.

Many Cologne citizens expressed dismay Wednesday about the lack of political accountability throughout the unravelling scandal.

René Böll, son of the late German author Heinrich Böll, told broadcaster Deutschlandradio Kultur that the primary responsibility lay with the city government, which had give the job to the KVB and then not properly monitored it.