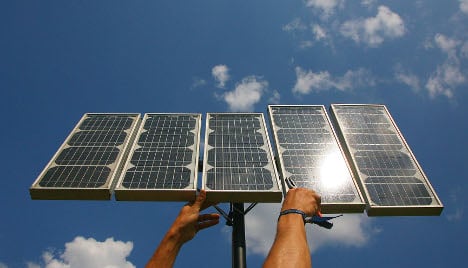 The cut, an initiative of Environment Minister Norbert Röttgen, was sparked by concerns that the solar subsidy was overheating the market and artificially pushing down the price of photovoltaic cells, which convert sunlight into electricity.

Solar panel owners have hitherto been guaranteed good prices for their power via a surcharge that all electricity consumers pay in order to cross-subsidise the industry. The purpose was to encourage the purchase of solar panels.

But this had eventually created an unacceptable market distortion, Röttgen said after the cabinet decision. Therefore the subsidy for solar power would in future be adjusted according to the current market trends.

Germany is the world’s leading market for solar panels but the subsidy had caused a dramatic drop in the price of German-made solar panels amid competition from cheaper producers in China.

For roof installations, the subsidy would be cut this year by about 16 percent and for solar parks it would be cut by 15 percent. Panels on so-called conversion sites such as old army bases and rubbish dumps would see a cut of 11 percent.

Power from panels installed on farmland would no longer be subsidised at all, because of concerns farmers had found it more lucrative to put in solar panels than plant crops.

The changes will come into effect on July 1 should it be passed by parliament.

The subsidies were already set to taper off over time, under the Renewable Energy Act. But this will be steepened under the new cabinet proposal.

From January 2011, the rate at which the subsidy drops away will increase from the present average of 9 percent by a further 2.5 percent if additional solar energy systems total more than 3,500 megawatts in a year. From 2012 the drop will be an additional 3 percent.

On top of that, higher consumption of the electricity by the panel owners themselves will be encouraged. Private homes that use their own solar power will get a financial incentive of eight rather than the present three cents per kilowatt-hour. This will also apply to businesses with solar power systems of up to 800 kilowatts.

In 2009, more than 3,000 megawatts worth of solar panels were installed, bringing the total in operation across the country to about 9,000 megawatts worth. Some 100 German solar companies with 60,000 workers generated about €9 billion in sales.

The German Solar Industry Association called for changes to the plan.

“The size and speed of the cut threatens the existence of a large part of the German solar industry,” said association chief Günther Cramer.