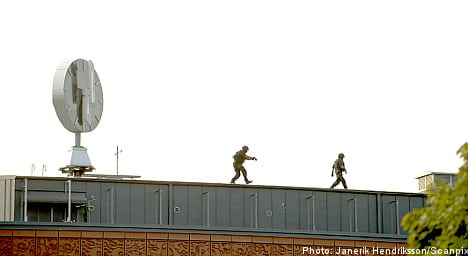 Rönnegård argued that poor surveillance by the police helicopters was not the only mistake committed. A report on the decisions taken by police during the first day after the alarm was sounded reveals serious deficiencies within police command, Rönnegård claimed.

Rönnegård has himself worked as a commanding officer within the Stockholm police force and has significant experience of how operations of this kind should be led.

It took one hour and 19 minutes for the police to initiate their action plan for serious exceptional incidents and for police to receive clearance for the use of back-up arms.

It took even longer, over three hours, before the decision was taken to check Sweden’s borders.

The report also details that the police hotline for tips from the public remained in chaos 37 hours after the robbery.

“The commanding officer took the decision too late. He waited too long to activate the action plan for serious exceptional incidents considering the chain of events, which just ran out of control,” Eric Rönnegård said to the TT news agency.

The Stockholm County Police Commissioner Carin Götblad declined to comment on the criticism on Tuesday. She confirmed however that the police plan to conduct a review of the incident and the work of the police when the investigation is concluded.

The Västberga cash depot was hit in the early hours of Wednesday September 23rd when several powerful explosions were heard.

A helicopter landed on the roof of the depot, managed by the G4S security firm, and men entered the building to seize a large quantity of cash. The robbers then made their escape in the helicopter with the police looking on.

Police helicopters had meanwhile been grounded due to a bomb scare – the gang had left a bag with the word BOMB inscribed on the side at the helicopter station on Värmdö in eastern Stockholm.

The police have since made a series of arrests but none of the suspects have yet been charged with an offence.