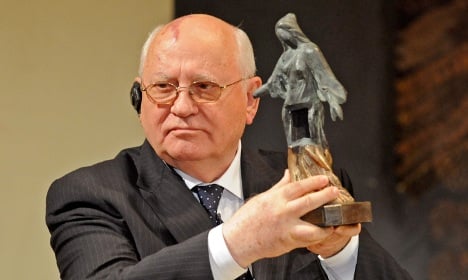 The organisation Friends of Dresden handed over the award, with €25,000 prize money, to the 78-year-old former Communist Party leader at the Saxony capital’s Semperoper opera house.

According to the group, Gorbachev was given the award for “conflict and violence prevention” – in particular his role in nuclear disarmament.

Through his initiative on unilateral dismantling of intermediate-range missiles, Gorbachev signalled an end to the Cold War arms race between the Soviet Union and the United States and thereby made “one of the most important contributions to the prevention of violence in past decades,” the group said.

Through his policies of glasnost (“openness”) and perestroika (“reform”), Gorbachev helped bring the Cold War to and end. Gorbachev received the Nobel peace prize for his efforts in 1990.

Receiving the award, Gorbachev warned politicians not to put security issues behind economic ones. Worldwide, some 40 countries had some kind of access to nuclear weapons, he said – and it remained a danger that these weapons could fall into the hands of terrorists.