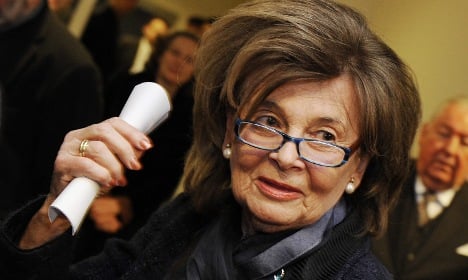 Following a board meeting in Frankfurt, Knobloch, 77, said she would not run for the job again when her term runs out in November.

Knobloch’s position at the top of Germany’s leading Jewish organisation had been brought into question of late amid suggestions there was dissatisfaction and infighting at the top of the council. Various media reported she was under pressure from other council members not to run again for president.

But she said in her statement that the board of directors and executive council had expressed their “full and unconditional confidence” in her and that there had been a “consensus” that she would see out her full term until November.

Her colleagues had recognised “with understanding and respect” that she wanted to make way for a generational change.

As a child, Knobloch, the daughter of Munich lawyer and Bavarian senator Fritz Neuland, was spirited away by her family’s housekeeper after her father was arrested by the Nazis. From 1942, she lived with Catholic farmers in Franconia in northern Bavaria, who pretended she was their own daughter.

Vice president Dieter Graumann – who was born in Israel in 1950 – is seen as a possible successor, though no hint was given as to who would take over when Knobloch ends her term in November.

The council, of which Knobloch has been president since 2006, has about 106,000 members and is considered an influential voice for Jews in Germany.