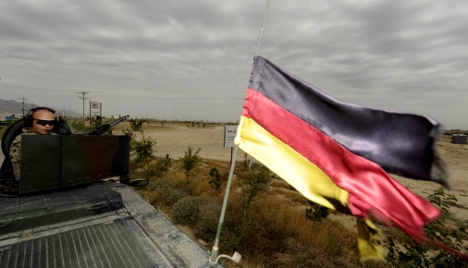 Authorities on the ground in Afghanistan said a 14-year-old girl had been killed and a six-year-old boy injured, though a Bundeswehr spokesman in Potsdam said there was as yet no confirmation of this.

It was also unclear which side might have been responsible. The death was reported by Afghan side.

The German army, or Bundeswehr, confirmed on Friday there had been an encounter between its soldiers and insurgents near Kundus, where the Bundeswehr is based.

German soldiers were attacked by insurgents and battle ensued, it said. One insurgent was thought to have been wounded.

Following a mortar attack on a police station, German soldiers had given medical care to an injured child and brought the child back to the field camp for further treatment, the statement said.

Germany has 4,300 troops in Afghanistan and has pledged to send a further 500.

On Wednesday, Georg Klein, the German commander who controversially ordered an airstrike on two hijacked petrol tankers in Afghanistan, will appear before a parliamentary inquiry into the September incident, which killed more than 100 people, including civilians.