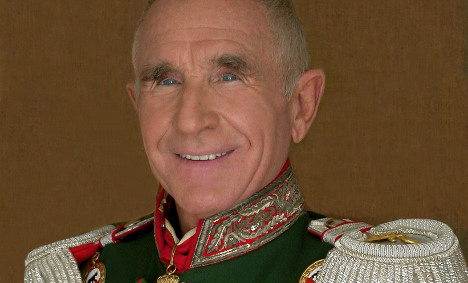 The 66-year-old prince, who acquired his title through adoption by Princess Marie-Auguste von Anhalt in 1980, is calling his virgin political campaign “Return to the Good Life.” His platform promises Californians a “sin tax” for the legalisation of marijuana and prostitution, the opening of the Mexican border, lower vehicle registration fees, legalisation of gay marriage, and an end to the Cuban cigar ban.

Why should Californians vote for you?

Why should they vote for anybody? They voted for Arnold. The only difference between me and Arnold is the money. He is filthy rich, and I don’t have that much, but I have lots of rich people behind me. I think I have more political knowledge than Arnold. He has the lowest ratings of any governor in California. He didn’t keep many of his promises.

What are your biggest issues in your ‘Return to the Good Life’ campaign as a liberal independent?

The whole thing started when I got my department of motor vehicle bill and it was €700 for 2010. That’s when I said to myself, ‘I have to jump into politics.’ I want to legalise all the Mexicans and other illegal workers so that the state can tax and insure them. That’s revenue for the state. It’s a messy thing here and it has to stop immediately. I want to overthrow Proposition 8 (forbidding gay marriage) so homosexuals can finally have peace. Though I believe in marriage between a man and a woman, we have a constitution that gives equal rights for everyone. I also want to legalise marijuana. There is already a big industry and it would be huge income for the state – it’s unstoppable, so they should legalise and cash in on it.

Do you smoke marijuana yourself?

No, I smoke Cuban cigars.

You were recently seen out and about with your wife of 23 years, Zsa Zsa Gabor, who prefers to stay out of the public eye – is she ready to become California’s first lady?

My wife is in a wheelchair after having an accident, so she likes to stay home. But she likes the idea. For me she was always the first lady, and if I get elected she gets the title officially.

Do you think Americans are prepared to be governed by royalty?

Why not? It doesn’t mean anything, it’s just a name. After 1918 in Germany royalty didn’t exist any longer.

But you enjoy taking on the role of aristocracy?

Of course I do. It’s a colourful picture, but that’s all. There’s nothing behind it.

That’s just all the jealous people talking. I was adopted by Princess Marie-Auguste von Anhalt, daughter-in-law of the last emperor of Germany, Kaiser Wilhelm II. I was a family friend and played soccer with her son for a long time. But then he died in an accident. The princess was alone, and said she would adopt me.

Do you have dual citizenship?

Yes. If the German government hadn’t allowed me to keep my citizenship there I never would have become a US citizen, because I didn’t want to lose that.

What do you miss most about Germany?

I miss the countryside and the culture. I miss the four seasons, the food, the mountains, and the lakes. I’m a good skier and loved to go skiing in Bavaria.

What was your childhood like when you were still known as Robert Lichtenberg?

I was born in Bad Kreuznach, in the state of Rhineland-Palatinate. My father was the chief of police in Frankfurt. But my childhood wasn’t very good. There were five children and my grandmother at home and it was after the war – times were hard, there was almost nothing.

What kind of response have you gotten since announcing your candidacy for governor of California?

It’s been a worldwide thing with lots of coverage. I’m already getting donations – even from Europe. People want me to do it. I do crazy stuff sometimes, but they like the idea.

You’ve said that Ronald Reagan inspired you to go into politics. Why is that?

I met him twice in the White House with my wife, and then often in California. For me he’s the best president America has ever had. When I was in the White House I’d only been in America for one month and I was frozen. He cheered me up a little bit, and we talked about Europe and the Berlin Wall. He said I had good political knowledge and should run for office one day.

Do you still maintain that you had a romantic relationship with the late Anna Nicole Smith?

Yes. We talked often on the phone, and once I asked her what she wanted with me. I said, ‘you have a lover, I have no time anyway, and I’m happily married.’ There was a possibility I could have been the father, and that’s when I jumped in. At the end when Larry Birkhead was proven to be the father I was very happy that it wasn’t Howard K. Stern’s because it would be in good hands and not with a criminal.

You mentioned you do crazy things, what is that about?

That’s Hollywood. It’s a crazy place. That’s just how it is. You have to be a little crazy to survive in Hollywood.

Is that the right approach for political survival?

I think it’s a completely different ball game. Arnold never separated that. Going to Sacramento was just a bigger stage for him, and he never changed. But I’m going to change and give up Hollywood – and mingle with the people, not the stars.