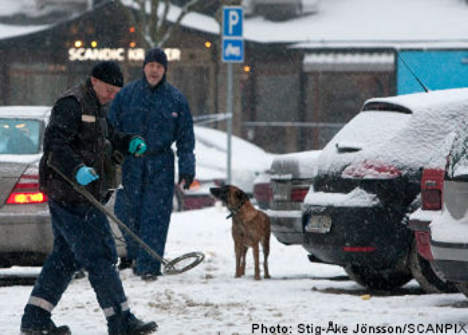 The man, who was reportedly shot in the central Stortorget square at around 3am, was given first aid by ambulance crews but died shortly after being brought to hospital.

There are unconfirmed reports of several shots being fired. One eye-witness told the news agency TT that the shootings took place in a car park on the square.

Other unconfirmed reports indicated that shots were fired outside a fast food restaurant.

“I cannot say exactly where he was shot, we need to wait for the results of the technical investigation,” police spokesman Mikael Persson told TT, adding that the man lived locally.

“He is known to have been involved in criminal circles, but we cannot comment on which ones for now.”

Persson could not confirm whether the police are looking for one or more suspects.

Police teams cordoned off the crime scene shortly after the shooting, and forensic teams, including a police sniffer dog, are examining the car park and the surrounding area.

“Half the square is sealed off. It’s packed with people and many are upset and wondering what happened,” said a witness.