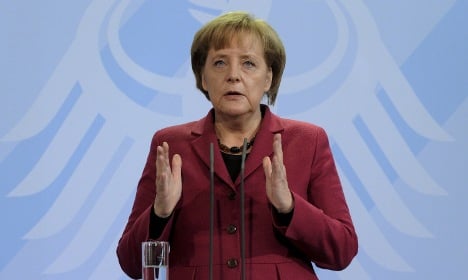 Speaking after talks with Israeli President Shimon Peres, Merkel said that the theme of sanctions would be tackled in February when France holds the rotating chair of the United Nations Security Council.

“I think February will be the crucial month,” Merkel said.

Asked whether Berlin would support a military solution to the dispute, Merkel replied: “Germany wants a diplomatic solution to this conflict and therefore we consider sanctions to be the next step.”

Merkel said the sanctions should be agreed within the United Nations but “if China or Russia or other countries do not go along with the Security Council, then a group of like-minded countries should aim for the same result.”

Peres said his country had “nothing against the Iranian people but rather the Iranian regime.”

“I would firmly urge the international community to act as soon as possible in order to dismantle the threat to world peace which is being articulated in the Iranian regime,” he said.

Asked whether it was possible to compare Iran’s President Mahmoud Ahmadinejad with Adolf Hitler, Merkel said: “The fact that the Iranian president has questioned Israel’s right to exist is completely unacceptable for a German chancellor.”

Merkel said there had already been “clear reductions” in Germany’s trade with Iran, although she acknowledged there was a “long tradition of economic cooperation” between the two countries.

Any sanctions against Tehran would only work if they were applied “over the widest possible basis,” she added.

Earlier Tuesday, one of Germany’s largest firms, Siemens, denied it had acted illegally after rights groups accused the industrial group of selling technology to Iran that could be used to monitor the Internet.

Peres was due Wednesday to address the parliament on International Holocaust Remembrance Day to pay tribute to the six million Jews killed by the Nazis, including his grandparents and uncle.

The president, who was accompanied to Germany by Holocaust survivors of German origin, attended a memorial service Tuesday at platform 17 of the Grunewald train station from where thousands of Berlin Jews were expelled to Nazi labour and death camps.

Peres’ trip came exactly a week after Prime Minister Benjamin Netanyahu visited Berlin for a meeting between the German and Israeli cabinets dominated by the Middle East peace process and the Iranian nuclear programme.

On Thursday, the president was due to leave Germany for Davos in Switzerland where he will join world leaders and top officials at the World Economic Forum.