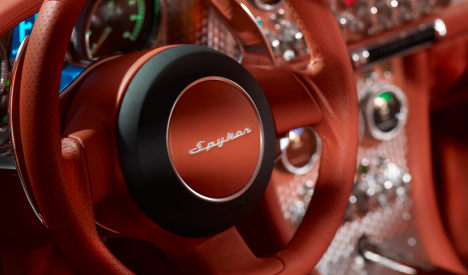 As part of the agreement, Spyker will form a new company, Saab Spyker Automobiles, which will carry the Saab nameplate forward.

GM officials said the deal calls for Spyker to pay $74 million in cash and allow GM to retain redeemable preferred shares worth an estimated $326 million.

Assuming quick action, the transaction is expected to close in mid-February, according to GM, which said that it would suspend its previously announced wind down activities at Saab.

and creatively for a deal that would secure a sustainable future for this unique and iconic brand, and we’re all happy for the positive outcome.”

Spyker said the terms call for an installment of $50 million by the expected closing date of February 15th and 24 million to be paid on July 15th.

“We are very much looking forward to being part of the next chapter in Saab’s illustrious history,” said Spyker chief executive Victor Muller.

“Saab is an iconic brand that we are honored to shepherd. We are delighted to have secured the jobs and livelihoods of thousands of loyal Saab employees, suppliers and dealers and to have given reassurance to the 1.5 million Saab drivers and enthusiasts around the world.”

Sweden will guarantee a loan of €400 million ($563 million) from the European Investment Bank to support the transaction, Swedish Enterprise Minister Maud Olofsson said in Stockholm.

“Throughout the negotiations, GM has always had the hope to find a solution for Saab that would avoid a wind down of the brand,” said Nick Reilly, president of GM Europe.

“We’ve worked with many parties over the past year, including governments and investors, and I’m very pleased that we could come to such a good conclusion, one that preserves jobs in Sweden and elsewhere. GM will continue to support Saab and Spyker on their way forward.”

The announcement appears to end a series of on-again, off-again deals for the lengendary Swedish automaker, amid intense fears of job losses in the country.

In December, GM nixed a proposed deal with Spyker following the withdrawal of a bid from Swedish sportscar maker Koenigsegg Group AB with Chinese backing.

GM has been undergoing a massive restructuring since emerging from bankruptcy with support from the US and Canadian governments last year. The company has decided to end its Saturn and Pontiac brands in the United States and has reached a deal to sell its Hummer brand to a Chinese buyer.

Up to an estimated 15,000 jobs were seen as at risk in a Saab shutdown, including those of suppliers and subcontractors. A Saab liquidation also could impact Sweden’s other carmaker Volvo, owned by US-based Ford Motor Co.

GM in November reversed plans to sell its European Opel/Vauxhall division and to restructure those operations on its own. Analysts noted that Opel, unlike Saab, is integrated into GM’s global operations.

Saab’s history as an automaker dates back to the 1940s, when the first cars were produced by the Swedish aircraft maker Svenska Aeroplan Aktiebolaget or SAAB. GM acquired Saab Automobile in 1990.