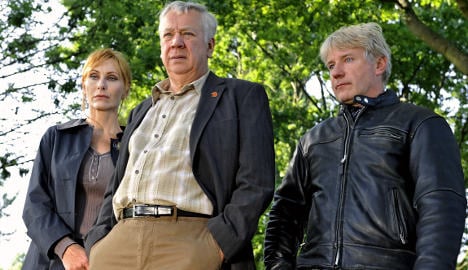 As an exchange student in West Germany during the waning days of the Cold War, I liked to joke that if the Russians wanted to invade, they should do it on New Year’s Eve. This was because everyone in the country was setting off loud firecrackers while completely drunk – including the soldier belonging to my host family.

Now having lived here for more than a decade, I’ve discovered an even better time to catch the Germans completely off guard: 8:15 pm on a Sunday. That’s when the seminal Teutonic television crime-drama Tatort, or “Crime Scene,” airs. At 39, Tatort is older than several members of Chancellor Angela Merkel’s cabinet. It’s probably one of the longest-running television shows on the planet and no self-respecting German would miss an episode.

Though I’d heard my friends talk about Tatort for years, its downmarket intro long turned me off. The staccato bass aims for The Ventures’ Hawaii Five-O or Henry Mancini’s Peter Gunn but falls short of even an advertising jingle. I also had an allergic reaction to Tatort’s cheesy gun sight logo, which might now be retro but is still cliché.

However, I was eventually lured in by the show’s structure – each episode is set in a town or city with familiar detectives scattered throughout Germany. In Munich, a guy named Udo Wachtveitl plays a big-city Bavarian cop alongside partner Miroslav Nemec, who represents Germany’s sizable Croatian population. In Bremen, Sabine Postel is a brash single mother and detective alongside Oliver Mommsen’s run-of-the-mill cop who gets along better with his partner than his love interests.

The regional structure isn’t accidental. It reflects the country’s network of public broadcasters, who also produce the episodes in their corner of the country. This adds background texture to the shows, such as the Baltic Sea and dairy cows playing a supporting role in Kiel just as the Rhine and Kölsch beer do in Cologne.

The show’s uneven scriptwriting is also an apt reflection of life in Germany – mostly mundane, sometimes gloomy and often just goofy. The singing detectives in Hamburg, for instance, were massively popular but made “Murder She Wrote” seem like a Salman Rushdie novel. Luckily they’ve since gone off the air. Still, most Tatort episodes are forgettable pulp, which makes them perfect couchtime companions.

The show has also always reflected German societal issues of the day. Integrating the country’s Turkish population, for example. Foreign occupying soldiers. The first episode even spanned Germany’s Cold War division. Klaus Kinski’s daughter Nastassja even once took off her clothes in an episode – though it has to be said that her getting naked was brilliant acting compared to the angst-filled constipation of her father.

Oddly, the time Tatort really shines is when it arrives in Frankfurt, admittedly one of my least-favourite German cities. The episodes in Mainhattan (a nickname as bad as the town itself) are always a brilliant kind of darkness. The writers have already offed one of the lead detective’s parents. Plural. That particular cop is played by Andrea Sawatzki, who has the same kind of subcutaneous sexuality I last appreciated in my fourth-grade math teacher. The most recent episode there inspired this column and had a super-rich son – played magnificently by shooting star Matthias Schweighöfer – covering up the death of his father.

He then orchestrated the murders of his aunt and uncle because they were generally just bad people. It was fabulous. If Schweighöfer keeps acting like that he might yet eclipse Germany’s other skyrocketing celeb du jour, Defence Minister Karl-Theodor zu Guttenberg.

The minister might be a blue-blooded baron in demand for red-carpet events, but I’m certain you’d find him settling onto the couch each Sunday evening at 8:15 pm next to his well-bred blonde wife Stephanie. Remote control in hand. Just like me.

Since a good German Stammtisch is a place where pub regulars come to talk over the issues of the day, Portnoy welcomes a lively conversation in the comments area below.

“The public discussion about decisions and procedures… that fall within my area of responsibility has now extended to ARD as a whole,” Patricia Schlesinger said in a statement.

Schlesinger is the head of Berlin radio station RBB, a regional member of the ARD network – one of the world’s biggest TV and radio networks.

The 61-year-old took up the chairmanship of the ARD network earlier this year under a rotational system.

According to ARD, Schlesigner has been under fire over consultancy contracts awarded at RBB, which she has headed since 2016.

Some German media have also accused her of using a company car for private trips and paying for meals at home with licence fee money.

Schlesinger said she was giving up her chairmanship of ARD in order to help “shed light on the accusations.”

ARD has an annual budget of almost 7 billion euros, financed mainly by a licence fee.

It employs around 23,000 people at nine regional channels, which also produce national programmes, and one channel aimed at an international audience.