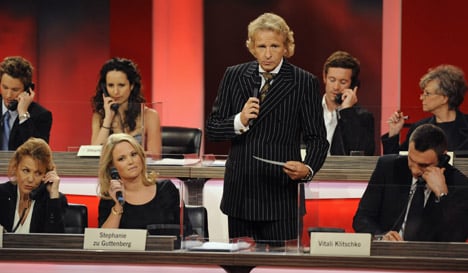 “It is an unspeakable catastrophe what is happening there in an already crisis-stricken country,” said Stephanie zu Guttenberg, wife of German Defense Minister Karl-Theodor zu Guttenberg. “Emergency aid is the top priority and everyone should do what they can.”

Musicians Marius Müller-Westernhagen, Silbermond, Chris de Burgh and Sarah Connor all performed at the gala, while other celebrities answered the phones to accept donations from the audience. The German football league donated €150,000, while comedian Mario Barth dug deep into his own pockets to pledge €25,000.

Eight days ago, a 7.0 earthquake struck the island nation, killing tens of thousands. On Wednesday morning, a 6.1 magnitude aftershock brought down rubble from damaged buildings and sent people fleeing from their homes.

On Tuesday, Chancellor Angela Merkel also pledged to give another €2.5 million on top of the €7.5 million that Germany has already given to help the impoverished island.

Those in Germany who didn’t manage to donate on Tuesday will get another chance on the weekend. Music channels MTV and Viva announced they will air music mogul Wyclef Jean’s star-laden live telethon “Hope for Haiti Now” starting at 2 am German time on Saturday.

Hosted in part by the Haiti native, the television event will feature appearances and performances by Bruce Springsteen, Taylor Swift, Justin Timberlake and Coldplay, among many others, on three stages in New York, Los Angeles and London. CNN anchor Anderson Cooper will also be featured with on-the-ground updates.

The gala will also be live-streamed over the internet on mtv.de and viva.tv as well as a repeat on Saturday at 9 pm and Sunday at 11 am on MTV.