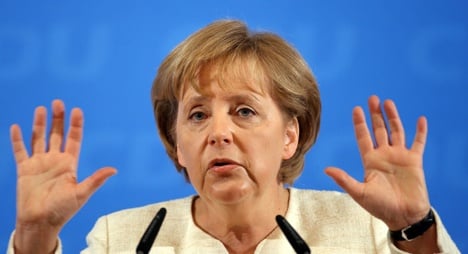 “I think I am someone who is always there when there are decisions to take. And when I have taken them, I announce them,” Merkel told a news conference in Berlin.

The comments came after a new opinion poll showed a majority of German voters thought Merkel was a weak leader, less than four months after the 55-year-old won a second term at the helm of Europe’s biggest economy.

More than half of respondents – 52 percent – said Merkel “was doing little to set the course for the government” versus 37 percent who approved of her management of the centre-right coalition. Meanwhile 61 percent said the government, Merkel’s hand-picked alliance of her conservative Christian Democrats with the pro-business Free Democrats, had had a “bad start” since their term began in late October.

And only about one in three – 32 percent – said they thought Merkel’s Christian Democratic Union fully backed her, down from 49 percent in October.

Critics accuse Merkel of an above-the-fray style that has allowed battles over economic policy among the ruling parties to rage on as Germany struggles to emerge from its worst post-war recession.

Merkel “is so far not ensuring calm and efficiency in her coalition but instead is watching her partners squabble,” the weekly Die Zeit said in an editorial. “Without more resolve she will endanger her success.”

Half of respondents said a planned meeting Sunday between the leaders of the three governing parties would likely do little to clear the air, while 44 percent expected an improvement.

At the crux of the dispute were the Free Democrats’ demands to uphold plans for even deeper tax breaks from next year after the government pushed through €8.5 billion ($12.2 billion) in tax relief from January 1.

Further areas of contention include Germany’s mission in Afghanistan, Turkey’s bid to join the European Union and a new museum about the fate of millions of ethnic Germans expelled from Eastern Europe after 1945.

Leading Christian Democrats as well as several state and local leaders say a tax giveaway now would be disastrous in the face of the tattered state of Germany’s public finances.

The economic downturn has blown a huge hole in the budget, with Merkel’s government predicting last month it will have to take on a record €85.8 billion in new debt in 2010.

Friday’s poll, conducted for ZDF public television by independent opinion research institute Forschungsgruppe Wahlen, found that a full 64 percent of respondents rejected the planned tax cuts, up from 58 percent in November. Only 31 percent were in favour. The poll was conducted among 1,256 randomly selected eligible voters January 12 to 14.

A separate survey released last week showed that 59 percent of voters were satisfied with Merkel, down 11 percentage points from December, with 67 percent unhappy with her new government, up seven points.

The poll by ARD public television and Die Welt daily showed that 66 percent thought the quarrelsome coalition was divided and rudderless, while 82 percent wanted Merkel, declared by Forbes magazine to be the most powerful woman on the planet, to show clearer leadership.