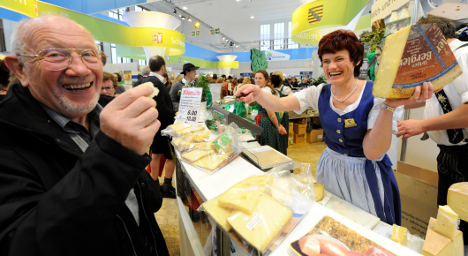 Almost 1,600 exhibitors from 56 countries are presenting their products and services at the 75th International Green Week, or Grüne Woche, where for ten days visitors can take a culinary world tour inside exhibition halls and sample some 100,000 specialities from five continents.

Aigner, who donned a dirndl, or a southern German folk dress, for the occasion, and praised the “sublime range” of food, flora and fauna on display.

Click here for a photo gallery of the Green Week in Berlin.

As the festival opened, president of the National Union of Farmers (DBV) Gerd Sonnleitner also criticized the renewed price cuts in grocery retailers, calling it a “provocation,” and alleging that “retailers are sinning against the common good.”

Sonnleitner went on to say that while consumers benefit in the short-run, they can only expect negative consequences from the low prices in the long term. Productivity will decrease and dependence on exports will grow, he said.

Meanwhile Aigner appealed to consumers to be mindful of quality as well as prices. Groceries aren’t just any product, she said, “but the means to sustain life.”

Until the show ends on January 24, animal lovers will be able to view more than 11,000 domestic animals across the exhibition grounds. For a behind-the-scenes glimpse into the world of modern agricultural production, the “experience farm” returns this year as a major attraction. Organizers expect over 400,000 visitors.