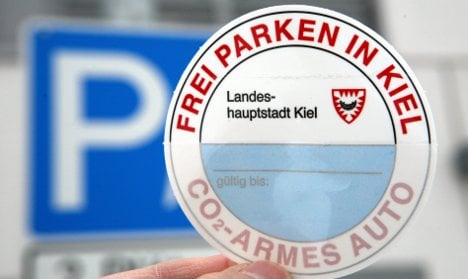 The new programme, which came into effect at the New Year, provides drivers with low-emission cars with a “free parking sticker” valid in any city-owned parking space, spokesman Arne Gloy said.

“With the sticker people will be allowed to park for two hours, so that they don’t stay the whole day. If they stay longer they will still be ticketed,” he said.

According to Gloy, the idea was a campaign promise made by Mayor Torsten Albig, who took office in June 2009.

Cars proven to emit less than 120 grammes of CO2 per kilometre will get the green light for the sticker at the Ordnungsamt, the office of public order, for the price of €5.

The Schleswig-Holstein city makes some €1.5 million each year from parking fees, and officials estimate it could lose up to €27,000 in revenue due to the new programme. But every qualified car were registered for the sticker to hit that sum, Gloy said.

“Naturally there will be a small reduction in income for the city, but it’s worth it as a measure to reward people who buy low-CO2 cars or get them to consider buying such a car, and also to support environmentally friendly thinking,” he said.

Mayor Albig told daily newspaper the Kieler Nachrichten on Friday that the scheme is meant to be positive reinforcement for green behaviour in contrast to initiatives in other cities that use stickers to ban polluting cars from city centres.

According to the paper, the first sticker was issued on Tuesday morning to the driver of a 10-year-old Audi.

The Kiel “free parking sticker,” which expires after three years, is not valid in private parking garages or lots.