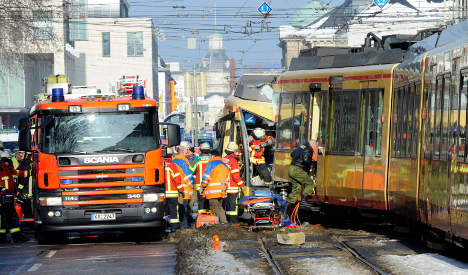 The authorities said two trams hit head-on at an intersection after they both turned onto the wrong track, but it remains unclear how the dangerous mix-up occurred.

Click here for The Local’s photo gallery of the Karlsruhe collision.

Both drivers sustained severe injuries and were trapped inside their heavily damaged cabins. One driver was freed quickly, but the other tram’s driver and four severely injured passengers had to be cut from the wreckage.

Another 20 injured passengers were reportedly in stable condition after they were treated in an emergency tent erected near the accident before transport to nearby hospitals, lead doctor for the rescue operation Ullrich Krebs said.

Traffic in the area was heavily disrupted in the aftermath of the wreck, city transportation officials said.

The accident occurred just days before workers were to break ground on a controversial €587-million construction project to build a tram tunnel in central Karlsruhe to ease traffic and accommodate a pedestrian zone.