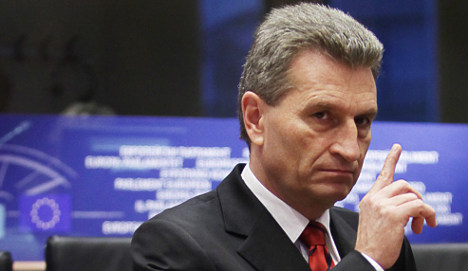 Oettinger was responding to questions from members of the European Parliament who are vetting all 26 nominated members of EU Commission chief Jose Manuel Barroso’s new policy cabinet.

Asked by one MEP about his involvement with one group “known for its anti-Semitic declarations,” Oettinger responded he had merely become the member of a controversial foundation upon becoming the premier of the state of Baden-Württemberg.

“I then refused to take part in meetings of the foundation,” he said. “I have very close and very trusting relations with the Jewish community,” he assured his interlocutors, underlining his “Christian values.”

In 2007, Oettinger was at the centre of a row over a eulogy he made defending the record of former Baden-Württemberg premier, ex-Nazi Hans Filbinger.

Oettinger, who has been nominated as EU energy commissioner, also stressed on Thursday that he would not represent the interests of Germany’s powerful energy industry.

“I am not a German commissioner I am a commissioner-designate for energy,” he asserted, while admitting close contacts with national energy leaders.

“I have no shares in EON, RWE or any other energy group, but I must have contact with these companies,” he said. “I have always been independent, I have always tried to be fair.”