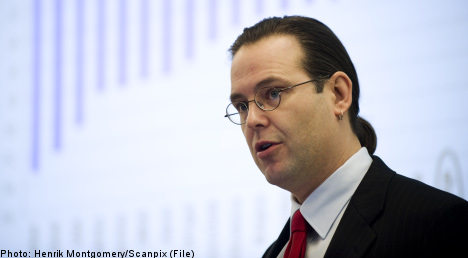 “The fact that they (the banks) aren’t hearing these signals which have been very clear is a provocation,” Borg told the TT news agency.

The finance minister’s comments come following reports from the Swedish Financial Supervisory Authority (Finansinspektionen – FI) that Swedish bank managers received bigger bonuses in 2009 than the previous year, despite lower profits due to the financial crisis.

Borg was also bothered by a story published in the Svenska Dagbladet (SvD) newspaper on Wednesday reporting that the amount of money set aside for bonuses in 2009 by Swedish bank SEB will likely exceed the bank’s profits.

“I’m convinced that we’re going to have a renewed debate about gradually strengthening the rules if the banks don’t get the message that the general public can’t accept this kind of behaviour, when profits depend to a great extent on public funding, ” Borg told TT.

Borg remains hopeful, however, that the new framework for bonuses laid out by FI will yield results.

“It’s a very austere framework and I think that it’s fundamentally good,” he said.

At present, Borg doesn’t want to discuss alternatives for managing the bonus problem, such as the Left Party’s suggestion of a special tax on bonuses above a certain level.

“I don’t want to go into other options,” he said.

Both France and the UK have implemented a penalty on high bonuses, and the Obama administration is expected to announce banking fees later this week which could bring in up to $120 billion to cover losses incurred by the US government in its efforts to save the banking system from collapse.