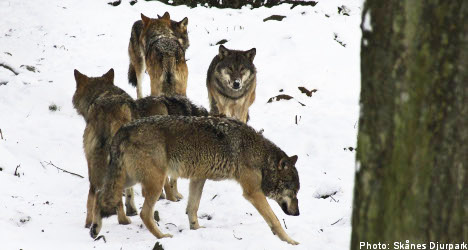 The twelve animals had managed to tear down a fence enclosing their sanctuary and were roaming around freely in Skåne Wildlife Park (Skånes Djurpark) during visiting hours. The public was evacuated, and the entire pack was shot, according to the Swedish news agency TT.

The shootings happened only days after Sweden’s first nationwide wolf cull in 45 years came to an end. An estimated 12,000 hunters were granted permits to pursue 27 wolves described by the Swedish Government as “genetically degraded” because of inbreeding. The hunt was heavily criticized by animal rights activists and local officials.

A park spokesman said the situation was extremely dangerous, although he added that the public was not at risk. “This was unbelievably tragic and stressful,” said Foreman Johan Lindström. “We think we dealt with this in the right way.”

“We are very, very saddened,” said Lindström. “It isn’t easy to build up an entire flock and takes several years.”

Skåne Wildlife Park near the south Swedish town of Hörby is the world’s largest of its type, with more than 800 wild and domesticated Nordic animals representing around 80 species. The park attracts more than 200,000 visitors annually.