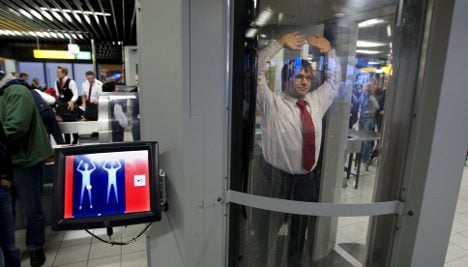 The scanners are being trialed at Schipol airport, Amsterdam Photo: DPA

Deputy Interior Ministry Klaus-Dieter Fritsche said this weekend health studies are still on-going and the software systems must still be refined, but confirmed that initial trials were planned for the summer.

Speaking to Focus magazine, Fritsche offered assurances that privacy would be protected. “The current situation will completely protect personal privacy rights,” he said.

Most of the time no image of the person scanned will be created; the system will simply generate a green OK light. Only when the scanner’s software sees something it does not recognise will any kind of an image be created.

“If the scanner raises the alarm, only an image of the relevant body section will be created on the screen, and that only schematically,” said Fritsche.

Others remain sceptical that the scanners will even be able to do the job required. Max Stadler, parliamentary secretary of state in the Justice Ministry, warned on Saturday against making a rash decision to buy and use the scanners.

The Free Democratic Party member told the Berliner Zeitung he did not yet think the technology was advanced enough to use. “We should first wait for the technological development,” he said.

He said the scanners must be able to protect those scanned from having their intimate privacy being invaded, and called for further tests to be conducted on the health consequences of being scanned. He also added, “On top of this, they must generate a considerable improvement in security.”

Others in the government also seemed less than convinced, with Chancellor Angela Merkel’s chief-of-staff, Ronald Pofalla, telling the Rheinische Post: “When there are newly-developed instruments which do not present any health damage, and actually only show up what is being looked for, there will be no justifiable arguments against the use of such equipment.”

The health question is also troubling business representatives, with the German Trade and Industry Association (DIHK) calling for frequent fliers to be exempt from the scanners.

DIHK president Hans Heinrich Driftmann told Saturday’s Neue Osnabrücker Zeitung, “Those who for example, work as international sales representatives and must therefore pass through a body scanner several times a week, should be urgently protected from constant radiation.”