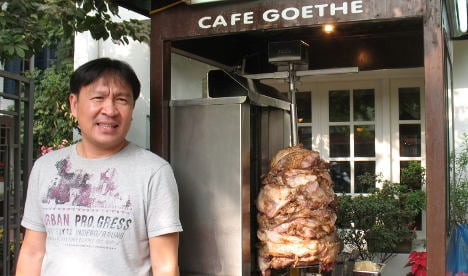 The German version of the dish, invented by a Turkish immigrant in Berlin some 40 years ago, consists of meat cuttings from a huge rotating spit on pita bread, dressed up with vegetables and yoghurt sauce. It has since become the bratwurst’s top fastfood competitor in Germany.

Tran Minh Ngoc, a 47-year-old cook at the German cultural institution, came up with the idea to start a döner stand about five years ago when he realised local students taking courses there needed more affordable options. Since then, hundreds of copycat kebab stands have opened around the city.

Tran regularly serves up other German specialties, but says some hard-to-find ingredients make the dishes too expensive.

“We also wanted to offer something for the student’s pocketbook,” he said.

His first ideas were Frikadellen, or meatballs, and bratwurst with chips, but these weren’t original enough, he said.

When he recalled his time working at an Augsburg wine cellar in 1996, Tran remembered frequently snacking on döners, and the idea was born to build a rolling stand to serve up the meaty sandwich pockets.

“Within a short time more and more people came,” Tran said. “We had long waits at the stand.”

He now sells the snacks for about €0.60, and claims his are the most authentic in town, though some modifications have been made to accommodate local ingredients. He uses pork because the typical lamb is too expensive, and baguette bread – a product of the country’s French colonial history – instead of pita bread.