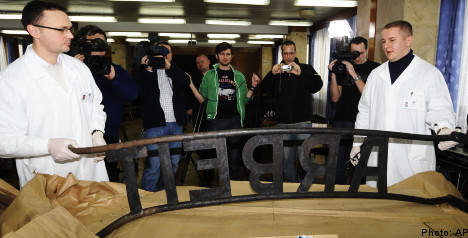 “My role was to go get the sign in Poland. I was the middleman and was

supposed to take care of the sale,” the man, a former neo-Nazi whose name was not disclosed, told Swedish daily Expressen.

The paper referred to the man only as “a former Nazi leader.”

The Polish daily Fakt identified the man as Anders Högström, who in 1994 founded the National Socialist Front, a Swedish neo-Nazi movement he headed for five years before quitting.

Another Polish newspaper, Gazeta Wyborcza, referred in its article to “Anders H.”

After leaving his party, Högström, 33, claimed he distanced himself from the movement and joined an association called Exit which helps youths quit far-right movements, according to Swedish media.

residents over the December 18th theft of the death camp sign, without revealing

Five Poles have already been arrested.

The men are charged with theft and damage and face up to 10 years in prison.

According to Expressen, the “former Nazi leader” claimed the sign was to be sold for several million kronor (hundreds of thousands of dollars) which was to be used to finance bombings against the Swedish parliament and government.

“But that was not something I wanted to be involved in or carry out, in any way,” he told the paper.

“I contacted the police immediately, as soon as the sign was stolen, and gave them all the information I had. I haven’t committed any crime. I was the one who saw to it that the sign was found,” he added.

Police recovered the five-metre metal sign — which means “Work Will Set You Free” in German — on December 20th in northern Poland and arrested the five Polish men. The sign had been cut into three pieces.

The sign above Auschwitz’s gateway has long symbolised the horror of the camp, created by Nazi Germany in occupied Poland in 1940 and in operation until Soviet troops liberated it in 1945.