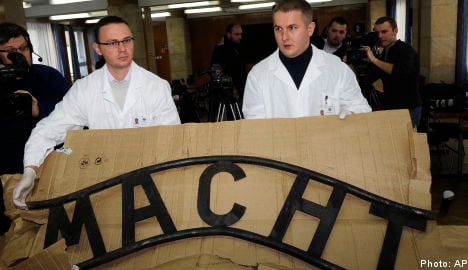 “We want to confirm the identity of these individuals, about whom we have partial details. We want them to be questioned by Polish investigators in Poland,” prosecutor Artur Wrona told reporters.

“The evidence gathered is solid enough to charge one of them, and possibly another. The third would be questioned as a witness,” he added.

Poland sent Sweden a formal request on December 31 for aid in its probe of the theft, which sent shockwaves around the world.

Investigators declined to confirm reports by the Polish news channel TVN24 that the individuals are two Swedes and a Swedish-resident Serb.

The theft was discovered on December 18 at the former World War II death camp in southern Poland, which is now a state-run museum and memorial.

Police recovered the five-metre metal sign — which means “Work Will Set You Free” in German — two days later in northern Poland and arrested five Polish men. The sign had been cut into three pieces.

Charged with theft and damage, the men face up to 10 years in prison.

Aged 20 to 39, they have criminal records for theft or violence. But none appeared to be neo-Nazis although they may have been working for foreign neo-Nazis, police said.

Swedish media have claimed the theft’s mastermind planned to sell the sign to finance far-right terrorist attacks against Sweden’s parliament and the home of Prime Minister Fredrik Reinfeldt. On December 24, Swedish intelligence service Säpo announced it was probing a plot to attack both targets.

And earlier in the week high profile Swedish defence lawyer Peter Althin said he expects to represent a Swedish citizen reported by Aftonbladet to have been planning to sell the sign to a wealthy British Nazi before ditching the plot and informing Interpol.

Althin would not confirm that his prospective client had confessed to involvement in the crime, only that he would represent the man should the prosecutor choose to press charges.

“I won’t get into it any more for the moment, except to say that I have, in Sweden, met the man who has been written about,” Althin told news agency TT on Tuesday.

According to British newspaper reports, a Swedish right-wing extremist group agreed to help a wealthy UK-based collector and Nazi sympathizer acquire the sign in exchange for “huge money”.

The cynical sign above Auschwitz’s gateway has long symbolized the horror of the camp, created by Nazi Germany in occupied Poland in 1940 and in operation until Soviet troops liberated it in 1945.

Around 1.1 million mainly Jewish prisoners from across Europe died at the camp, mostly in its notorious gas chambers. Among the other victims were non-Jewish Poles, Roma and captured Soviet soldiers.