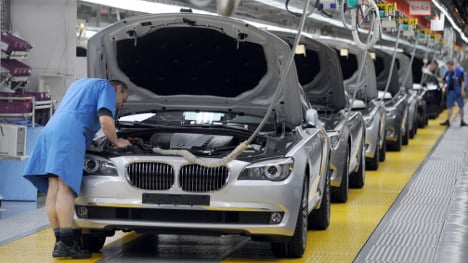 The Wall Street Journal reported on its website that China had exported €663 billion worth of goods in the first 10 months of 2009, compared with Germany’s €638 billion.

Meanwhile, in a sign Europe’s biggest economy is still only limping towards recovery, the latest foreign trade report by the BDI Federation of German Industries found Germany’s export sector would not return to its former strength until 2014.

The report found that after slumping 18 percent in the past year, exports would recover just four percent in 2010.

“Germany’s export industries are on the road to improvement, but the recovery process will take longer,” BDI president Hans-Peter Keitel wrote in his introduction to the report. “The export industries had to battle through a tough setback in 2009.

The figures were based on a large survey of German businesses across a wide range of sectors.

Before the global economic crisis struck in 2008, the growth in German exports was humming along at eight percent a year, the report found. Germany has traditionally been the world’s biggest exporter and one third of jobs here rely on exports.

Risks to the German economy persisted, the report said. The cheap money flowing from the expansive monetary policies of central banks could spark a new financial crisis.

Furthermore, some countries’ stimulus programs were running out. And growing protectionism through “buy national” programs were also a danger, the BDI warned.