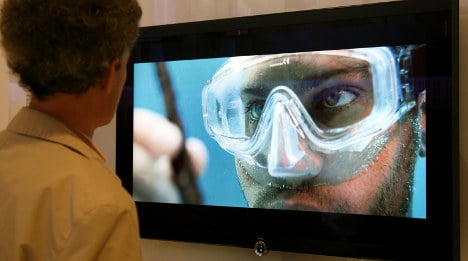 According to broadcasting survey firm Media Control, the average total of 212 minutes per day in 2009 was five minutes longer than the average for 2008. The rise followed three years of declines.

The biggest couch potatoes turn out to be Berliners aged over 50. They watched a massive 333 minutes – more than five-and-a-half hours – of television per day in 2009.

Bringing up the rear, however, were also Berliners – though those in the youngest age group of three to 18 years – with an average of just 75 minutes a day in front of the Glotze.

Among the key target audience for advertisers – viewers aged between 14 and 49 – the average viewing time rose by four minutes to 182 minutes.

The greatest rise happened in Saxony, where the average telly viewing time of 182 minutes was 18 minutes more than in 2008.

As in previous years, Brandenburg claimed the title as the most TV-addicted state overall, watching 262 minutes a day – nine minutes more than in 2008. Brandenburg is also the state where viewing has grown most in the past decade, with the average time 52 minutes higher than in 2000.

Only two states’ residents watched less television than before. People in Mecklenburg-Western Pomerania cut their telly viewing time by five minutes to 231 minutes a day and residents in Saarland scraped three minutes off their average to sit on 222 minutes a day.

Hessians stayed the same as the previous year on exactly 200 minutes. However, younger Hessian viewers (those aged 14 to 29) managed to knock a full half hour off their 2008 time, spending 107 minutes in front of the box in 2009.

However, residents of Bremen in the same age group went the other way, adding a massive 54 minutes to their viewing time to watch an average of 166 minutes a day.