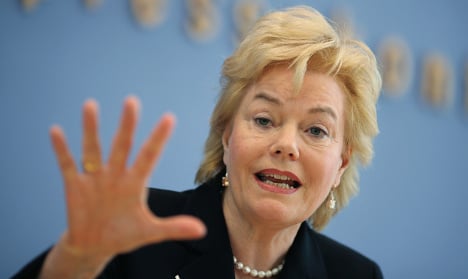 Steinbach, president of the Federation of Expellees (BdV), had been involved in a political row with Foreign Minister Guido Westerwelle, who opposed her appointment to the board of the Federal Foundation for Flight, Expulsion, Reconciliation.

Westerwelle was worried that the the appointment of the vociferous Steinbach would damage relations with neighbours to Germany’s east, especially Poland, which remains sensitive over the issue of Germans and World War II, and which views Steinbach with suspicion.

Some 15 million ethnic Germans were expelled from Eastern Europe after the war.

But now Steinbach has offered to withdraw her candidacy for the 13-member board, though she has insisted in return that the foundation is given greater independence from the government.

“The political conflict of the last months over the decision of the BdV to seek representation, via its president, on the 13-person board of the Federal Foundation for Flight, Expulsion and Reconciliation, is a singular embarrassment of unsurpassed proportions and is unworthy of our democracy,” Steinbach said in a statement.

She blasted the government’s “paternalism” on the issue, which she said was entirely directed at placating other countries.

Quoting Goethe Prize-winning philosopher Raymond Aron, Steinbach said in her statement: “The character and the self-respect of a nation shows itself in how it deals with the victims of war and with its dead.

“If one takes this declaration … as a benchmark, things are not in good shape in Germany. The appointment rights of the BdV are being deliberately subjected to political control.

“Sympathy and respect for the German victims of flight, displacement, rape, murder, deportation and forced labour remain as a result out of reach.”

She said that she wanted a reasonable way out of the standoff and an end to the “stigmatisation” of the expellees.

Among her demands for greater independence for the foundation was that the government give up its power of veto over future appointments to the board.

Westerwelle said he was considering her proposal.

“I will of course look at every proposal that is fair, realistic and constructive,” Westerwelle said on German radio station Deutschlandfunk.

He stressed there was no personal conflict between with Steinbach and said his aim was only to ensure “that the relations between Germany and Poland were not damaged.”