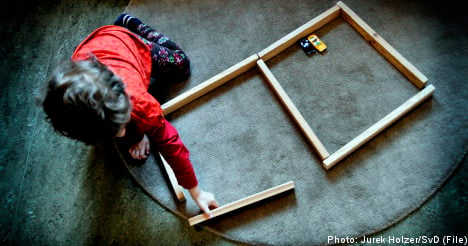 Overall, the programme, launched in July 2008 by the centre-right Alliance government, has not proven overly popular with Swedish parents.

But a study carried out by the Dagens Nyheter (DN) newspaper reveals that increasing numbers of parents in neighbourhoods dominated by residents with immigrant backgrounds are choosing to use the benefit and keep their children at home rather than send them to publicly funded preschools.

In the Spånga-Tensta neighbourhood north of central Stockholm, for example, the number of families requesting the childcare allowance has more than doubled, from 61 in 2008 to 135 in 2009.

In addition, two preschools in the area have closed down due to a lack of children, prompting concerns that immigrant children who remain at home risk falling behind in their acquisition of the Swedish language.

“Many say ‘it doesn’t matter, they’re so small’. But even an 18-month-old enjoys and benefits from preschool, as it helps develop both social skills and language abilities,” Karin Danielsson, head of the Stormhatten preschool in Tensta, told the newspaper.

In effect since July 1st, 2008, the childcare allowance (vårdnadsbidraget) is available to parents who forego the option of sending their children to a publicly financed preschool. Parents are allowed to continue working, but the benefit can’t be combined with traditional parental leave payments, unemployment insurance benefits, or other forms of economic support.

The idea behind the childcare allowance is to give families the ability to stay at home a little longer with their young children once their parental leave benefits have been used up.

According to DN, around 100 of Sweden’s 290 municipalities have implemented the measure, but as of yet there are no nationwide statistics on the number of parents participating in the programme.

Sweden’s main teachers union, Lärarförbundet, has long been critical of the allowance, issuing early warnings that the programme would likely lead to increased segregation by allowing unemployed immigrant parents and their children to isolate themselves at home, rather than engage with different aspects of Swedish society.

“Here we see how the childcare allowance is counterproductive when it comes to efforts to reduce segregation and give children the language training they need,” Lärarförbundet head Eva-Lis Preisz told DN.

“The children are the losers.”

Educators’ concerns are shared by the Social Democrats, who also fear the childcare allowance will hamper children’s language development.

But the Christian Democrats, who championed the measure and are hoping to increase the benefit ceiling from 3,000 kronor ($422) per month to 6,000 kronor, don’t view the developments in the predominantly immigrant neighbourhoods north of Stockholm as problematic.

“Having a family’s economic situation improved a little bit during such an important time in the child’s life can only be positive. What children lose in language development they make up for with a feeling of security,” the Christian Democrats’ spokesperson on family policy, Emma Henriksson, told DN.

Foreigners give their babies names that reflect their nationality. Photo by Keira Burton from Pexels

As The Local reported on Wednesday, the most popular names for newborn girls born in Switzerland in 2020 were Mia, Emma, and Mila.

For boys, Noah took the top spot, ahead of Liam and Matteo.

But what about the most popular names among various nationalities living in Switzerland?

The answers come from the same study.

The top name for boys of Italian parents is Giuseppe, followed by Antonio and Francesco. For girls, Maria is in the first place, Anna in the second, and Francesca in the third.

There are many Portuguese immigrants living in Switzerland and, like their Italian counterparts, they like to give their children traditional names: José, Carlos and Manuel for boys, and Maria, Ana, and Sandra for girls.

Spanish names are similar to those of Portuguese babies.

José, Juan and Jose are most popular boy names, while Maria, Ana and Laura are in the top three spots for the girls.

Most boys of Turkish descent are named Mehmet, Ali, and Mustafa. Among girls, Fatma, Ayse, and Elif dominate.

Arben, Vallon, and Bekim are top names for boys, and Fatime, Shquipe, and Merite for girls.

Bekim is in the first place for boys, followed by Muhamed and Fatmir. Among girls, Fatimr is in the lead, Sara in the second place, and Emine in the third.

Aleksandar, Dragan and Nicola take the first three spots. For the girls, Jelena, Maria and Snezana are at the top.

Can you give your baby any name you want?

Not in Switzerland, you can’t. It’s important to keep in mind that the cantonal registry offices, where new births must be announced, don’t have to accept very unusual names.

In another case, a couple in the canton of Bern were ordered to change the name of their newborn son because their choice – Jessico – was considered too feminine.

Several names have been forbidden in Switzerland, including Judas, Chanel, Paris and Mercedes.