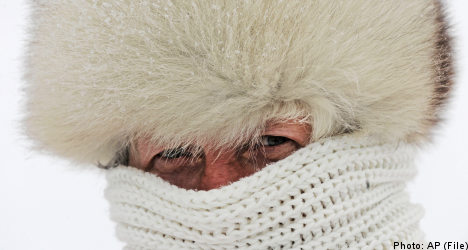 According to forecasts by Swedish meteorological agency SMHI, temperatures in the town of Särna in Dalarna are expected to drop to minus 44 degrees Celsius on Wednesday night.

Chilly temperatures are expected to blanket large swathes of central and northern Sweden, while remaining somewhat less frigid in southern and western Sweden.

“Really cold air has moved in from the north,” SMHI meteorologist Per Holmberg told the TT news agency.

The agency expects the coldest temperatures in the country to be recorded in and around Särna.

“We expect very light winds and also very clear weather there. Primarily in the valleys is where it will get the coldest,” he said.

According to SMHI’s forecast, daytime temperatures in Särna aren’t expected to climb above 36 degrees below zero.

Icy cold temperatures are expected to remain in place for the next several days before slowly climbing again.

The lowest January temperature ever recorded in Sweden is minus 49 degrees Celsius, most recently in Karesuando, located on Sweden’s northern border with Finland.

The same temperature was also recorded in 1951 in Vuoggatjålme in the mountains of northwestern Sweden, about 30 kilometres from the Norwegian border.