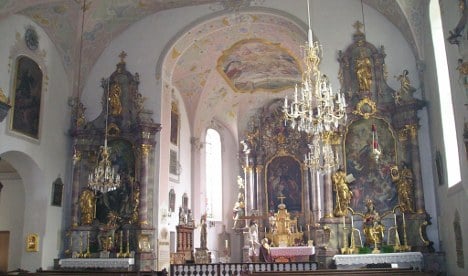 Baroque interior of the Pfarrkirche in Rennertshofen. Photo: Wikipedia Commons

After some 25 congregation members heard sinful noises coming from the organ loft in the 18th-century church in Rennertshofen, a woman mounted the stairs to discover the couple in flagrante.

The 26-year-old officer and his playmate left their love nest in a hurry. While the woman covered her face with a stocking cap to conceal her identity, one of the witnesses recognised the policeman.

“It is regrettable that one could stoop low enough to do something like this,” another priest at the church reportedly said later during a sermon.

Criminal police in the nearby city of Ingolstadt have taken on the case. Should the cavorting couple be convicted, they face up to three years in jail.

It is not clear how long the officer will remain suspended from duty.

“The suspension was an immediate measure meant to be a clear sign,” a police spokesperson said. “Trust in the employee is of course damaged and further service is currently not welcome.”