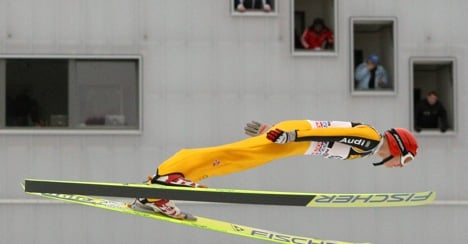 The mainly German crowd of 25,000 had little to cheer in the home contingent, coached ironically by an Austrian in Werner Schuster. Bodmer was their top finisher in 16th spot while world championship runner-up Martin Schmitt could only come in 25th.

Schuster complained that Schmitt and co are “currently jumping well below their potential.”

Following a poor showing last Tuesday at Oberstdorf, where he could only place ninth, World Cup champion Schlierenzauer made no mistake as he leapt 136.5 and 137.5m for a total of 277.7 points.

“The New Year has started off well – that was really a perfect day,” said Schlierenzauer, who put his off-day at Oberstdorf down to a stomach upset.

Finnish five-time overall winner Janne Ahonen, second at Oberstdorf on his comeback from retirement, could only manage sixth this time after jumps of 129.5m and 137m gave him 259.2 points.

After the two races Kofler leads the way with a 20-point advantage over Loitzl with Ahonen third five points further back.

After adding 2.5m to Schlierenzauer’s previous venue record of two years ago Ammann is fourth, just three points adrift of Ahonen – and three ahead of Schlierenzauer.

Ammann leads the overall World Cup standings after eight of 24 events with 529 points, with Schlierenzauer second on 511 ahead of Kofler on 426.

The next leg comes Sunday at Innsbruck with the final leg also in Austria, at Bischofshofen on January 6.