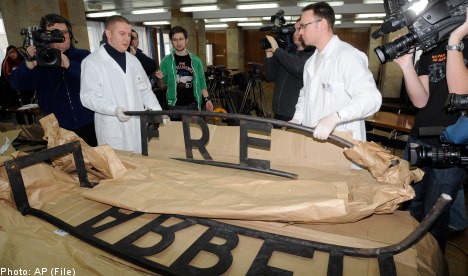 “Their discussion focused on a request for judicial assistance being drawn up by regional prosecutors in Krakow,” the southern Polish city where the probe is being steered, it said.

The relatively rare step of involving ministers came “because of the importance of the case”, it added.

Earlier, a spokesperson for the prosecutor’s office in Krakow, Boguslawa Marcinkowska, said the request would be made on Wednesday, but declined to provide any further details, the Polish PAP news agency reported.

Five men are currently being held in Poland in connection with December 18th theft of the iconic, five metre long sign, which translates from German to “Work sets you free”.

Polish police are also hunting for a sixth person, reportedly based in Sweden, who they believe may have acted as an intermediary for whoever ordered the theft of the sign, an unnamed source told PAP.

Sources close to the investigation added that four of the thieves now in custody claim they were unaware of the sign’s historical significance.

While Polish investigators said the mastermind of the theft lived abroad, they have consistently refused to confirm media reports that the individual is in Sweden.

They have also refused to say whether his or her name is known to Polish justice authorities, or that they plan to ask the Swedes for an arrest.

Poland had contacted Interpol and its European Union equivalent Europol in the wake of the theft at the former World War II death camp, on the edge of the southern Polish city of Oswiecim.

Police recovered the metal sign two days later in northern Poland, charging the five suspects with theft and damage. If convicted, they face up to 10 years in prison.

The men, aged 20 to 39, have criminal records for theft or violence, but none appeared to be neo-Nazis although they may have been working for neo-Nazis, police have said.

According to the BBC, police began to suspect the theft had a Swedish connection following the arrest of two of the suspects in the Polish port of Gdynia, which has ferry connections to Sweden.

Unconfirmed reports that the theft was carried out at the behest a Swedish collector surfaced at the same time that the Swedish tabloid Aftonbladet reported last week that an extremist group was plotting a politically-motivated attack against the Swedish parliament, the foreign ministry, and the prime minister’s residence.

Citing unidentified sources, the tabloid said the attack was meant to be financed by the sale of the “Arbeit Macht Frei” sign.

“I can confirm the fact that we have some information about alleged plots on the parliament and prime minister’s residence,” Säpo spokesman Patrik Peter told AFP.

However, Peter couldn’t confirm whether there was a connection between the plot and the theft of the sign from the main gate of the Auschwitz concentration camp.

“I have no information to give you about that,” the intelligence agency’s spokesperson said.

The sign has long symbolised the horror of the camp, created by Nazi Germany in occupied Poland in 1940 and run until Soviet troops liberated it in 1945.

This was where 1.1 million mainly Jewish prisoners from across Europe died during World War II: some from overwork and starvation, but mostly in the camp’s notorious gas chambers. Among the other victims were non-Jewish Poles, Roma and captured Soviet soldiers.