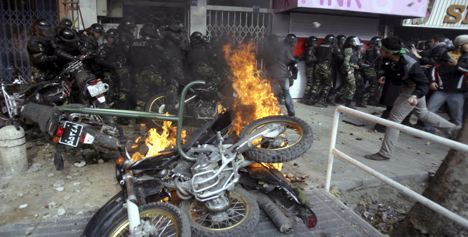 “I condemn the recent violent clashes in Iran in which people died due to the unacceptable actions of the security forces,” she said in a strongly worded statement.

“I call on Iran to live up to its obligations under the International Covenant on Civil and Political Rights,” she said. “In particular, the right to free expression through peaceful demonstrations must not be restricted or suppressed by violence.”

Merkel expressed her sympathies with the families of those killed in the anti-government protests, after Iranian state media put the death toll at eight, and called on Tehran to defuse the situation.

“The leaders are called on to avert further escalation and seek political dialogue for a peaceful resolution of these internal political disputes,” Merkel said.

In a similarly sharp statement, Foreign Minister Guido Westerwelle said Iran was obliged as a signatory of the UN covenant to protect its people.

“I condemn the brutal reaction of the Iranian security forces against demonstrators in the strongest terms,” he said.

“Iran must live up to its duties to protect the civil and political rights of its citizens,” Westerwelle’s statement continued. “The international community will be watching and not look away.”

In the bloodiest showdown between critics of the government and security forces in months in Iran, at least eight people were killed according to state television in clashes in Tehran and other cities.