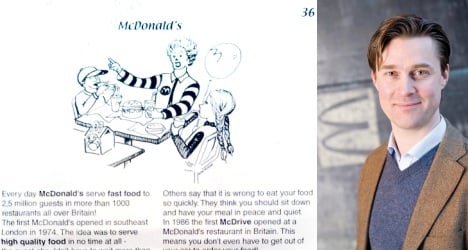 “I had no idea about this,” Claes Eliasson, a spokesperson for McDonald’s in Sweden, told The Local.

Several Swedish schools have been using a set of worksheets featuring a flattering portrayal of McDonald’s to help fifth graders learn English, according to the Svenska Dagbladet (SvD) newspaper.

The exercises, which one parent described as “unqualified advertising copy” praising the fast food chain, include a short text about McDonald’s operations in Britain, as well as several follow up questions.

“The first McDonald’s opened in London in 1974. The idea was to serve high quality food in no time at all,” reads the text.

Further on, the passage downplays concerns about health of fast food from McDonald’s noting that “you can take carrots with your burger instead of French fries”.

The final line of text encourages readers to have a Big Mac while watching their favourite football team.

Per Håkansson, who holds a doctorate in consumer behaviour from the Stockholm School of Economics, was outraged when he saw his son’s McDonald’s homework assignment.

“It’s a textbook example of how you change children’s knowledge, feelings, and behaviour and it’s a school assignment,” he told SvD.

“What really makes me angry is the complete lack of reflection. At the same time that a person is looking for facts in a text, they turn that information into their own. It’s an old method for getting people to change their opinion.”

According to SvD, the lesson, part of a handout produced by academic publisher Beta Pedagogik has been distributed in Swedish schools for the last four years without the knowledge of McDonald’s officials in Sweden.

“We had nothing to do with this,” said Eliasson, adding that McDonald’s generally shies away from getting involved in educational activities in Sweden.

“We have no ambitions to be a part of classroom activities in Sweden.”

Eliasson added, however, the McDonald’s does support several local educational programmes in other countries, but refrained from commenting in detail on the McDonald’s-themed lessons featured in some Swedish schools until having further time to review the material.

An editor with publisher Beta Pedagogik, Bo Claesson, also denied to SvD that McDonald’s had anything to do with the worksheets, explaining that they were written by a teacher who “perhaps liked going to McDonald’s”.

“It was thoughtless and a mistake to include the text,” he told the newspaper.

He added that the publisher plans to remove the McDonald’s-related passage from subsequent versions of the worksheets distributed to Swedish schools.