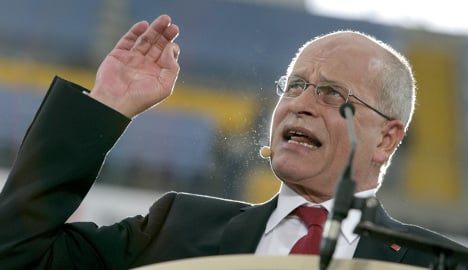 Making his demand in an interview with Sunday’s edition of the Weser Kurier newspaper, the union’s chief, Berthold Huber, said the investment would better equip Germany to pull out of the global economic downturn.

“Do we want to support good businesses, or give up on them because they have a liquidity bottleneck at the moment and can get no credit or only much too expensive credit?”

To ensure the return of growth and employment after the crisis, core industries such as the metal and electronics sectors had to be supported, he said.

“The financing can’t be a problem,” Huber said, pointing out that the bank rescue packages had clearly cost more than what he was calling for.

The economic stimulus packages the government had previously put in place – totalling about €80 billion plus €100 billion in loan funding guarantees – were not enough, Huber said.

The stimulus legislation passed on Friday by the upper house, the Bundesrat, was politically motived, particularly the “billions worth of tax relief for the rich,” Huber said.

IG Metall, which is one of Germany’s biggest and most powerful unions with 2.4 million members, represents both blue and white-collar workers in a wide range of industries related to metal.

Huber also said the union would exercise restraint in wage negotiations with metal industry firms due to start in the spring, provided companies gave credible guarantees that workers‘ jobs were be secure.

“Our members expect of us that we will above all keep their jobs safe,” he said.