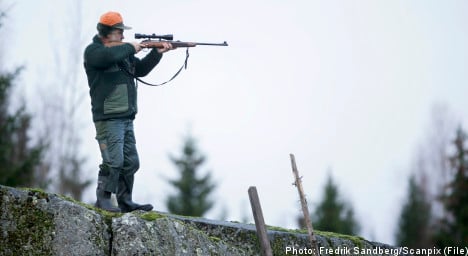 “The Swedish Environmental Protection Agency has decided that 27 wolves can be hunted during the period January 2nd to February 15th. That represents about 10 percent of the wolf population,” it said in a statement.

Parliament decided in October to limit the wolf population to 210 animals for the next five years.

This is to be done by issuing hunting permits in five regions where wolves have reproduced every year for the past three years.

Nine wolves can thus be hunted in the Dalarna and Värmland counties each, and three in each of the Västra Götaland, Örebro and Gävleborg counties.

Parliament’s decision is aimed at increasing public acceptance of the predators.

The animal’s presence is controversial in the country as domestic and farm animals are increasingly attacked by wolves, which have been sighted recently near residential areas, including near the capital Stockholm.

Wolves almost became extinct in Sweden in the 1970s but their number has increased steadily since efforts were made to reintroduce the animal to the country.

There were between 182 and 217 wolves in Sweden last winter, the Environmental Protection Agency said, noting that new litters had been born since then.

The Swedish Association for Hunting and Wildlife Management hailed the decision.

“Finally we have a decision that demonstrates an increased understanding for those who have to cope with wolves in their everyday lives. This is going to reduce frustration over the management of wolves in the countryside,” it said.

More than 10,000 hunters have already applied to the Environmental Protection Agency for a permit to hunt wolves, it added.

But the Swedish Society for Nature Conservation (SSNC) expressed disappointment and said the wolf hunt violated European Union legislation on species and habitats.

“This could severely worsen the situation for the small, inbred Swedish-Norwegian wolf population, and there is also a big risk that the quota will be exceeded since there is so much interest in the wolf hunt,” it lamented.

“Instead of launching an illegal hunt that worsens the situation for a severely threatened species, the government should increase efforts to prevent the damage the wolves cause to domesticated and farm animals,” SSNC chairman Mikael Nilsson said.