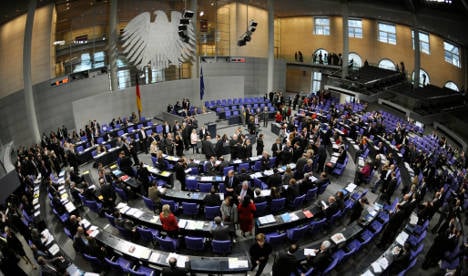 “In the future we also want to have mothers in the parliament, therefore we want to pass a rule for exceptional situations that allows children up to 12-months old in the plenary hall in emergencies,” Green party politician and Bundestag Vice President Katrin Göring-Eckardt told the paper.

There are several mothers in parliament who have infants, the paper said. Free Democrat Judith Skudelny recently caused a stir when she brought her four-month-old baby daughter into a parliamentary session.

Since then, several female parliamentarians have been pressing Bundestag administrators for a new rule to allow babies if mothers can’t find alternative child care.

“The majority is smaller than it was during the grand coalition – every vote counts,” Green party politician and mother of an eight-month-old daughter Kerstin Andreae told the paper.

Supporters of the measure are also reviewing other options to accommodate politicians with babies, such as a day care room near the plenary hall of the Reichstag building, the paper said.