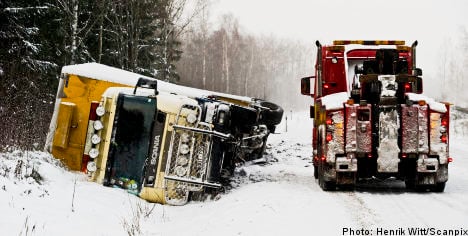 By 3pm, police counted around ten incidents of vehicles skidding off the roads around Nyköping in eastern Sweden.

“The E4 motorway is extremely slippery. A number of trucks have gone off the road,” said Södermanland County police spokesperson Hans Erik Åkerlund.

In Stockholm County, city buses were ordered off the roads around lunchtime in several municipalities in the north of the city, as well as in Huddinge, Botkyrka, Södertälje, Ösmo, Nacka, and Värmdö to the south and Ekerö to the west due to icy conditions and poor visibility.

Commuter rail lines were also running behind schedule because of malfunctioning track switches.

On the Baltic island of Gotland, the rough weather caused the cancellation of several school bus routes.

Police in Stockholm, Östergötland and Gävleborg counties report several cases of cars sliding off slippery roads as a result of the day’s snowy weather.

One 30-year-old man was injured at 7am when his car slammed into a guardrail around on the E4 motorway near Hagsta north of Gävle in eastern Sweden.

The man was taken to hospital and the wreck resulted in a temporary closure of the roadway.

Extremely slippery road conditions also plagued many parts in the south of the country, with accidents numbering in the double digits, although no serious injuries were reported.

Rail traffic out of Malmö in southern Sweden was also delayed throughout Thursday morning due to the fierce conditions.

According to meteorology agency SMHI, the heavy snowfall currently pummeling central and eastern Sweden is expected to weaken as it moves further south overnight.

By Friday, only residents in Skåne and Blekinge in southern Sweden are expected be forced to deal with additional snowfall.