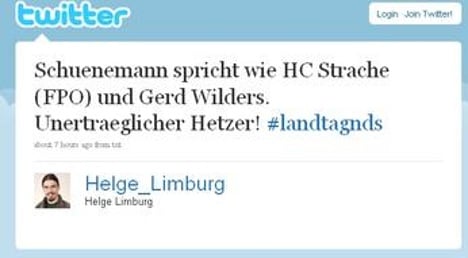 The Monday afternoon debate about the state budget for 2010 in the state capital Hannover had to be called off amid the chaos.

Following a debate about the rights of asylum seekers to stay in Germany, Greens MP Helge Limburg wrote a “tweet” on the social networking internet site describing Lower Saxony’s state Interior Minister Uwe Schünemann, of the conservative Christian Democrats (CDU) as an “insufferable agitator” who was “shamelessly on the right-wing fringe.”

When the parliamentary leader of the pro-business Free Democrats (FDP), Christian Dürr, made this known to the chamber, all hell broke loose.

The allocation of the €25 billion state budget was quickly forgotten as an outraged CDU parliamentarian, Hans-Christian Biallas, sprang to his feet and gave the opposition the finger. An equally scarlet-faced CDU parliamentary leader, David McAllister, demanded the Greens disown the remarks.

The parliamentary leader of the Greens, Ursula Helmdold, ruled out an apology, provoking the tumultuous situation further before Lower Saxony premier Christian Wulff called for the debate to be broken off.

Things calmed down only after Limburg offered a qualified apology, saying: “I stand by my criticism of the issue, though not my choice of words.”

Politicians have run into trouble by sending messages to the internet via Twitter before, including one incident in May when a federal MP released the results of German President Horst Köhler’s re-election before it had been officially announced.