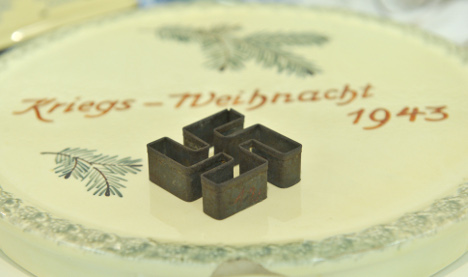 Presents wrapped in paper covered with Nazi symbols nestling beneath a tree adorned with swastikas and grenade-shaped baubles: welcome to Christmas during Adolf Hitler’s Third Reich.

As a new exhibition in the western German city of Cologne shows, the Nazis tried to skew the Christmas story to do away with the Jewish baby Jesus and impose their racist ideology and propaganda on the popular festival.

“Celebrating the birth of a Jewish baby was unthinkable for the Nazis,” Jürgen Müller, the chief researcher behind the exhibition, told AFP. “But Christmas was too popular to be banned. They therefore decided to corrupt it.”

The creator of the exhibition – named “Far From A Holy Night” – got the idea as she was scouring flea markets for Christmas memorabilia.

“I wanted to have an ‘old-style’ Christmas for my father’s 70th birthday … that’s when I started to come across these objects,” Rita Breuer told AFP.

The objects “tell a story not often told,” she said, adding that she hoped the exhibition would prompt historians to do more research on the subject.

Ironically, some Nazi Christmas items, such as the wrapping paper emblazoned with twisted crosses, were later banned for fear that children would tear the beloved symbol of the Third Reich. But Müller said some of the Nazis’ corruptions of Christmas have since been adopted by today’s neo-Nazis in Germany.

Among the memorabilia available is a CD of Christmas songs, with an innocent-looking sleeve of a snowy landscape, but with the songs rewritten by the Nazis and all references to Christianity expunged.

“Many visitors are amazed to discover that the version of the song they know is not the original but the way the Nazis re-wrote them,” said Müller.

Germans still buy so-called Julleuchter – Christmas lanterns – without knowing they were popularised by Hitler’s sidekick Heinrich Himmler in 1938, with tens of thousands of them being manufactured by concentration camp prisoners.

Nevertheless, despite traces of the Nazis’ Christmas corruption still remaining, the Third Reich generally failed to dampen the Christmas spirit in Germany.

“During this period, the Germans kept the link with the Christian festival, even if the symbols were no longer used,” said Müller.

The exhibition is hosted by the Cologne centre for Nazi research and runs until January 17.