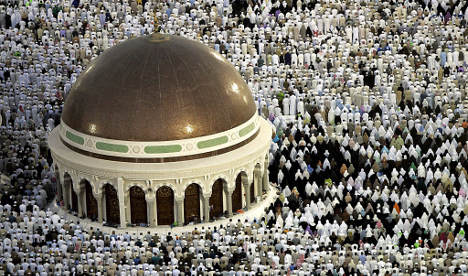 Adnan Pirisan’s idea for the padded prayer rug came to him in the middle of the night.

“I’d been thinking that as Muslims we start to get knee pain over the course of time from kneeling at prayer, but we always dismissed it as part of life and duty,” the 46-year-old Schwentinental resident told The Local on Friday.

Pirisan’s 71-year-old mother suffers from knee pain, and he’d begun to have similar problems when he had his eureka moment. By the time his parents took a pilgrimage to Mecca for the Hajj last year, he had a prototype ready to send along with his mother, who reported substantial interest from other Muslims.

Just a few months later in April 2008, Pirisan patented a more streamlined version of the orthopaedic prayer rug, which packs up into a handy tote bag.

“My parents told me that the people in Mecca all had bags to carry their rugs, but they were unwieldy and difficult to deal with in high temperatures, so I thought it would be great to combine the rug with the bag to make things easier,” he said, adding that people can also use them to carry water, books and other necessities.

Now after one month of online sales, he has sold some 500 rugs and plans to take his softer, gentler version of the prayer mat with a 12-millimetre cushion to fellow Muslims worldwide. He has even specialised to include a child-size rug and the extra-cushy “Lux” version. Inquiries from potential business partners have already come in from the Netherlands, England, France and Dubai – where he plans to attend a trade show next year.

“I had nothing to do with rugs before,” the Turkish-born entrepreneur told The Local. “I was an electronic technician and owned my own business for years.”

He now employs his wife, two sons and a foreign sales representative with plans to expand in their Schleswig-Holstein home just outside Kiel in 2010.

“It’s really fun for me, it was always a dream of mine to invent something that would help people,” he said. “I thought that everything had already been invented, but that’s not true.”

Orthopaedic surgeon and director of the Göttingen University Hospital Wolfgang Schultz told news agency DDP that padding for the knees while praying was a sensible idea.

“The pressure to the knee is very strong doing this, particularly during extended kneeling,” he said.