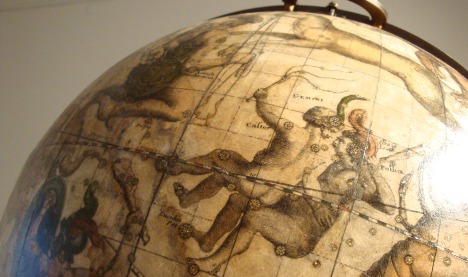 The restored globe. Photo: Museum of Cultural History in Stralsund

It is one of a pair of twin heaven and earth papier-mâché globes created by Amsterdam engraver and art dealer Gerhard Valk almost 300 years ago under guidance from leading mathematicians and astronomers at the time.

“They are among the first and best work from this firm,” Grüger told The Local. “The only comparable pieces are two pair in the Netherlands, and a younger model in England.”

But both of Stralsund’s globes, which were bequeathed to the Hanseatic city as part of a valuable collection belonging to Pomerania’s Swedish Governor General Axel Graf von Löwen in 1761, have suffered severe damage over the years.

“After the death of the governor they were stored in a building in Stralsund that unfortunately had roof damage,” Grüger said. “The protective layer over the paper was damaged, and there were dirt particles and bleaching that reached the paper. They were no longer in a presentable state.”

For the last four and a half months, the celestial globe has been at the Lassan workshop of paper restoration expert Eckhard Kobelius. But on Thursday it returns to the museum where it will be displayed alone until its terrestrial mate is restored after next year. Together the globes are worth some €700,000.

Restored to its original glory, the celestial globe displays what Grüger called “very beautiful and fantastical” illustrations of heavenly bodies and constellations. Meanwhile the globe modelled on the earth’s surface includes fascinating insights into the creator’s antiquated geographical knowledge.

“On the earth globe the continent of Australia is missing, because at the time it was made some didn’t know that it existed,” Grüger said. “It’s a crazy illustration of the era – there’s just nothing there!”

Last year the Alfried Krupp von Bohlen und Halbach Foundation donated €22,000 to finance the project after the museum had made repeated appeals for funding to support the project.

The globes will be exhibited in the 600-year-old “Museum House” location, which is one of the city’s oldest merchant residences, boasting 25 generations of trade.