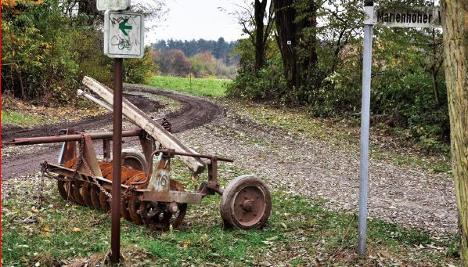 It will take you no more than an hour’s drive to reach Hof Marienhöhe, the organic farm 77 kilometres southeast of Berlin. Upon arrival, the oppressive dreariness of a typically overcast autumn day lifts to reveal the beauty of another world: a group of about eight cows with startling mahogany coats blink languidly at the shiny, out-of-place Volkswagen Sedan as they block the long driveway to the main farm building.

As the animals are herded away, a field of bright yellow blooms – distinctly out of place amid the briskly cold, late November weather – fills the view. Any visitor would agree that Hof Marienhöhe is breathtakingly beautiful, but its boast of being the oldest continuously-operating Demeter farm in Germany (it was founded in 1928) would probably result in blank stares: while we’ve all grown tired of hearing about bio, Demeter farming remains an obscure concept for most Berliners.

After Italy and Austria, Germany boasts the third highest number of organic farms in Europe: 16,476 farms and 734,027 hectares of German land were run according to EU-approved organic standards in 2003. Of this, there were 1,327 Demeter-certified farms on more than 53,000 hectares; Brandenburg alone boasts 25 farms. The Hof Marienhöhe’s 100 hectares of usable farmland (the other half of its 200 total hectares is forest) make it a relatively midsize operation. Compared with the amount of land farmed organically, the Demeter slice of the ‘all-natural’ pie is a thin one, partly because of the standards required by the German certification organization, Demeter e.V.: it is the most rigorous organic certification in the world.

The Demeter philosophy first took root in the early 1920s. It sprang from a series of lectures on agricultural practice by Rudolf Steiner, the early 20th century Swiss philosopher/scientist/theologian best known for founding the Waldorf Schools. These lectures were described in 1923 by one particularly ardent Steiner acolyte as having “such germinal potency […] that a few sentences or a short paragraph often sufficed to create the foundation for a farmer’s or scientist’s whole life-work.” Today, there are 16 Demeter member organizations in countries around the world.

Sigmar Goldhammer, one of the directors of the Hof Marienhöhe, generously took it upon himself to show us his farm. He’s a middle-aged German with the tanned, weather-worn face and garb (sturdy boots and a strong windbreaker) of a man who has spent the last 20 years of his life working those 100 hectares of land. On our tour, we learn that the farm’s operations have remained essentially unchanged since its founding by Dr. Erhard Bartsch, a student of Steiner’s, in 1928.

The tumults of recent German history have resulted in only minor disruptions for Hof Marionhöhe: the Nazis shut down the farm’s self-published newsletter in the 1930s, but left the operation of the farm intact throughout World War II. By using his Austrian citizenship to emigrate – which turned his land into foreign, privately-owned territory, and thus saved it from the collectivization forced upon other East German farms – Bartsch managed to maintain Marienhöhe’s exceptional structure in the GDR era as well.

Today the farm continues, as it always has, to breed cows for milk and cheese, and pigs for slaughter; it also grows produce and grain for the consumption of humans and livestock. The cows’ milk is made into a wide variety of cheeses at the onsite dairy, and the bakery produces fresh loaves of bread from the farm’s own oats, barley and wheat.

Alongside these homemade delicacies, a seasonal plethora of fruit and vegetables (carrots, potatoes, apples, pears, peaches and plums, among others), as well as locally-sourced honey, are all sold at the farm store. “People come from all over the region for our products – some from as far away as Berlin,” notes Goldhammer. The farm also sells its products in various farmers’ markets in Berlin, and across Brandenburg.

Goldhammer explains the unseasonable blooms and the cows’ unusual coats: the cows – like all the farm’s animals – are bred “from old breeds of livestock that were threatened with extinction”. They are healthily fed on hay dried from the farm’s blooming fields of grass, whose flowers endure the bitter north German winter because of the chemical composition of the soil. This, in turn, is due to the fields’ complex fertilization system – in which the cows’ manure plays an integral role. This self-contained, interconnected cycle of materials is a key aspect of the Demeter philosophy: its followers see a farm as a “living organism”. And the first priority is nature. As Goldhammer explains, “For us, the bottom line is to give back to the land.”

The simplistic beauty of this self-sustaining system of cultivation is again reflected in the farm’s communal structure: a total of 35 people reside there – a number that includes everyone from school-age children to retirees as old as 95. “It’s important for us to be a community, that the people who worked here their whole lives are able to spend their last years here. There are also lots of children, as well as trainees and interns,” Goldhammer says. The core workforce comprises 15 people; the others are members of its tight-knit community.

When asked why he’s chosen such a line of work, Goldhammer answers, “Culture, in the largest sense of the word. We’re here to establish a cultural impetus, to shape the cultivation of the land, as well as to cultivate a social culture around that – a more humane culture.”

This ethos is in evident in all aspects of life at Marienhöhe, from the cultivation of the land and animals to the way administrative decisions are made to the economic side of things. Everything is treated holistically.

“We want to give future generations this land for them to sustain, which will in turn sustain them.”

For the farmers at Marienhöhe, their work is also about demonstrating that there’s a modern way to live off the land, one that goes beyond profit and prejudices. “Berliners dismiss all of this as ‘JWD’ [Janz weit draußen, or “way far out there”]. They have no idea,” Goldhammer laments. So, despite the lack of money – the farm is hoping to fund badly-needed repairs to its cow barn with customer donations – he and his colleagues are staying strong.

“It’s all about a different culture, a culture we believe in and we want to spread further. That’s what is important to me; that’s what I want to do.”