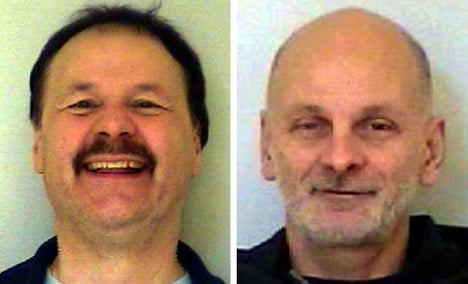 The 40-year-old guard is suspected of having helped the men get through locked areas and providing them with loaded prison service weapons as well as ammunition, according to statement by the state chancellery of North Rhine-Westphalia.

Investigators were alerted to the guard’s involvement when they watched video recordings of the breakout, the statement said.

Peter Paul Michalski, 46, and Michael Heckhoff, 50, were still on the run late Saturday after escaping Thursday from a prison at Aachen, southwest of Düsseldorf, where they were serving sentences for murder and attempted murder.

They attacked a prison warder and a porter before fleeing in a taxi for Cologne, where they hijacked a car driven by a 19-year-old female student.

Running out of fuel late Friday, they abandoned the car and its driver and disappeared, police said.

Police had set up roadblocks Saturday around the western city of Essen in the hunt for two jail-breakers, who were said to be armed and dangerous.

The guard under suspicion was in custody as investigations continued, the North-Rhine Westphalia Justice Ministry announced.