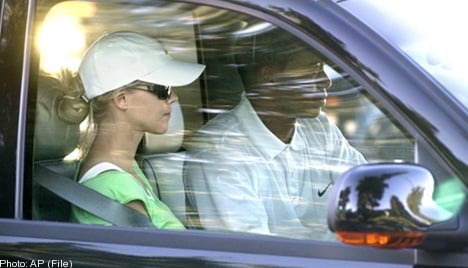 Woods suffered facial cuts and bruises but was treated and released from hospital the same day, following the single-vehicle smash in which he hit a fire hydrant and then rammed into a nearby tree.

Police said 33-year-old Woods was outside of the vehicle with his wife Elin next to him when they arrived. Woods was in a semi-conscious state, suffering from cuts to both his upper and lower lip.

His wife told police she heard the crash and then used a golf club to break a window of the Cadillac SUV to help her husband.

“I believe he struck his head and his wife came out and pulled him out,” Windermere Mayor Gary Bruhn told CNN.

“His wife was there and Mr Woods was on the ground. I am not going to say in and out of consciousness, but he was dazed. He was bleeding from the mouth and nose.”

The golfer has since issued a statement via his website which reads: “We appreciate very much everyone’s thoughts and well wishes.”

No charges have been laid as police said they are still investigating the cause of the crash.

Bruhn said just because there is an ongoing probe doesn’t mean there will be charges. “I personally feel it was an accident,” he told CNN. “I have read the police report and it says there was no alcohol involved.”

Superstar Woods, a 14-time major winner, had been set to play his last tournament of the year at the Chevron World Challenge at Thousand Oaks, California, December 3-6 – an event he hosts annually.

He was scheduled to hold a news conference on Tuesday in California.

Earlier this month, Woods landed the Australian Masters but had returned home for a fortnight’s break prior to playing in the World Challenge next week.

Woods and former model Nordegren married in 2004 and the couple have two children.