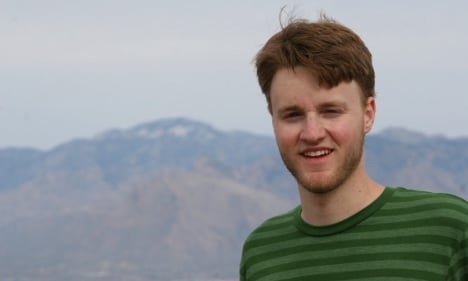 Devon Hollahan and his friend Josh Friedman had travelled to Frankfurt from Prague, where Hollahan works as an English teacher, to attend a concert by the band Portugal The Man on November 20.

Hollahan and Friedman had been drinking beer and were “tipsy” after attending an after party with the band, his father said. They then took a taxi to central Frankfurt to find their hostel around 3 am, getting out at the Hotel Luxor before heading to the Taunusanlange metro station – on the edge of the city’s red light district.

Friedman turned away from Hollahan to ask someone for directions, but when he finished, his friend was gone.

“It was in a matter of just one-and-a-half to two minutes,” Hollahan’s father Jeff told The Local from a television news studio in Scottsdale, Arizona, where he was preparing to make an appeal for help in the search for his son.

“The plan has been to generate some media attention so we can get more eyes and ears on the street that are familiar with his description in case someone sees him or remembers something from early Saturday morning,” he said.

Friedman attempted to contact Hollahan with text messages and phone calls, but he did not respond. When he didn’t show up at the hostel the next day, Friedman reported him missing to the Frankfurt police and the US consulate.

“This is totally out of character,” Jeff Hollahan said, describing his son, who recently completed an economics degree before earning his teaching certificate in Prague, as responsible and conscientious.

The young man’s father said he has been working closely with the US consulate, the US Department of Homeland Security, and police in Frankfurt and Prague.

Authorities in Prague will soon visit his son’s apartment in Prague to look for clues.

“Their plan is to review the information on his laptop to see if there’s anything that suggests that maybe he had other plans once he got to Frankfurt,” Jeff Hollahan said. “They will also get some of his clothes to send to Frankfurt to help the team with search dogs.”

Hollahan plans to fly into Frankfurt on Monday morning to aid authorities in their search, he said.

Meanwhile the German media reported that kidnapping could be a motive and that the FBI had become involved in the case because Hollahan holds the title of First Vice President at financial services provider Morgan Stanley.

“I don’t know if the FBI is on the case,” he said. “But I am not a prominent banker or executive, I am a financial advisor.”

The US consulate in Frankfurt told The Local it could not comment on the case due to privacy laws until they had approval from officials in Washington, DC.

Devon Hollahan is 22-years-old, 183 centimetres (six feet) tall, weighs approximately 68 kilogrammes (150 pounds), and has red hair. When last seen he was wearing a green, plaid shirt, jeans, a black jacket and a tan cap. Anyone who believes they may have clues to his disappearance is asked to contact Frankfurt police or the US consulate.

“There have been a lot of resources called in to assist us, but to date there are no hints, no nothing. He’s literally just dropped off the face of the earth,” his father said.