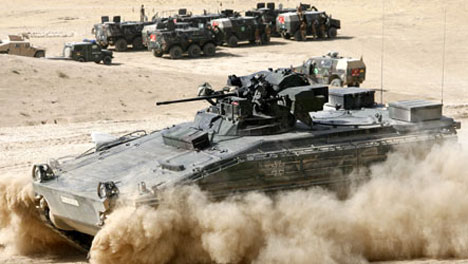 “In a regular cabinet meeting, we decided to get the process of extending the mandate underway,” Merkel told reporters.

The extension to the deployment, which has seen German soldiers engaged

II, must now be approved by parliament before the mandate expires in December.

The Bundeswehr currently has around 4,400 soldiers deployed in the country, making it the third-largest contingent of NATO forces.

“With this, we want to send a clear signal. The new federal government is sticking by Germany’s responsibilities,” Foreign Minister Guido Westerwelle said. “It is about more than security, it is also about reconstruction and it is about good leadership, including the fight against corruption.”

The cabinet also decided to scrap a mission to send AWACS surveillance planes to Afghanistan after Turkmenistan and Azerbaijan refused to allow NATO to fly them through their airspace and extended Germany’s participation in a mission to fight piracy off the coast of Lebanon by six months.

The daily Hannoversche Allgemeine Zeitung reported on Wednesday that the German military has decided to redeploy heavy weaponry in northern Afghanistan in response to the deteriorating security situation in the region.

The paper said the Bundeswehr will send at least five Marder armoured fighting vehicles to Kunduz. Resembling small tanks, the vehicles have 20 millimetre cannon and can carry up to 12 infantrymen.

The German forces there will also receive a modern armoured vehicle used in reconstruction efforts.

German Defence Minister Karl-Theodor zu Guttenberg announced during a visit to Afghanistan last week that the Bundeswehr would send an extra 120 soldiers to the strife-torn country. According to the Hannoversche Allgemeine, the troops will largely come from the Panzergrenadierbataillon 92 in Munster, Lower Saxony.