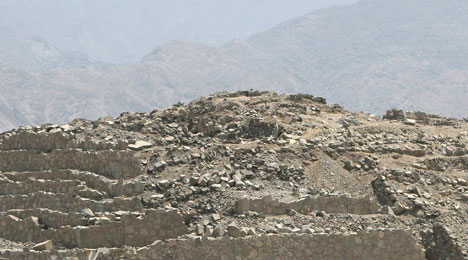 Much of Peru is arid. Photo: DPA

In sprawling settlements like Bellavista del Paraiso – a dusty clutch of streets on Lima’s south end named “Beautiful View of Paradise” with some eye-popping optimism – there is no running water. There is no well.

Buying water, trucked in by resellers, costs nine times what it does in richer urban areas, precisely in places where no one can afford it.

And Bellavista’s more than 200 residents are used to making do without water; they are among the stunning 1.3 million of Lima’s eight million people who have no access to water.

“Really, it just seemed like it would be impossible to catch fog with plastic netting, and that it would turn into drops of water,” said Noe Neira Tocto, the mayor of the slum which lies just inland from the Pacific.

“We are the very first to have fog-catchers in Lima’s poor neighborhoods,” he said, proudly showing off a system that works with a net that looks a lot like volleyball netting. “We have five panels that are eight meters by four meters,” perched on the mountaintop above, he explained. “With them we are able to collect up to 60 liters per night in wintertime.”

Each single panel costs the equivalent of $800 dollars, said the 37-year-old Neira. When the netting traps the fog, water droplets run down it into a small aluminum gutter on the panel’s edge. Water keeps collecting until it runs – aided by gravity and drain canals – down to cement storage tanks that lie halfway down the local hill.

The benefits are huge and multifaceted. Part of the water is channeled to a vegetable garden where vegetables and spices are grown.

Most, though, is kept in ground-level storage tanks for residents to use at home for cooking, cleaning and bathing.

Slum resident Olga Arce is in charge of popping water-purifying pills into the tanks mainly to keep out mosquitos because they can spread dengue fever.

The idea for the fog catchers comes from German biologists Anne Lummerich and Kai Tiedemann, with the German development NGO Alimon, recalled Neira. The two arrived in Bellavista in 2006, were surprised how dense the fog was, and encouraged locals to see if they might be able to tap the fog to improve their lives.

They helped with the system’s construction and installation and stayed a few months teaching locals how to run it before heading home.

They called it a Green Desert experiment, and even after one day running, it looked like a success. Some were disappointed at having to use purifying tablets, though. And it is not all simple going: locals have to trudge up the mountain at least twice a week to check on the state of the nets.

It is a steep and slippery path. At 5:00 am, time for one recent outing, visibility was near zero at the hilltop, 600 meters (almost 2,000 feet) above sea-level.

But it’s worth the work, said Olga Cajahuaman. She said she grows radishes, greens and spices “with the fog water.” The water and food supplies are heaven sent for families earning under $200 a month.

French hydrologist Alain Gioda said the fog-catching actually recalls an ancient Inca technique in which plants and trees – not nets – were used to gather water here, collected at the base of the tree or plant.

“But what was possible with those techniques and an (Inca) empire of eight million is not possible on a current scale of a country of 28 million people,” he added.